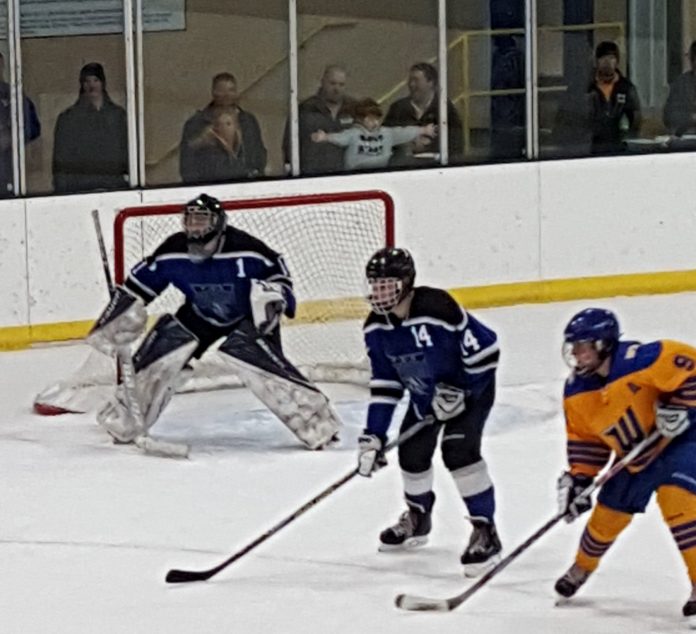 Wadena/Deer Creek 6, Morris/Benson Area 2
WADENA – A second period scoring surge by Wadena/Deer Creek helped the Wolverines earn a 6-2 win over Morris/Benson Area on Tuesday.
After a scoreless first, Michael Halvorson put the Storm ahead on a feed from Matt Tolifson just 35 seconds into the second.
The Wolverines then erupted with four straight goals in a span of 5:39 to take a 4-1 lead. The Storm got one back when Tolifson scored a power-play goal on a feed from Kolby Goff, but the Wolverines added one late in the period and an empty-netter in the third.
Brady Goff assisted on each goal and Brady Bachman made 29 saves in net as the Storm fall to 0-2.
Max Phillips scored four goals for the Wolverines with three coming on the power-play, Lleyton Petit had four assists, Colby Schertler added three, and Josh Dykhoff stopped 23 shots as they improve to 3-1.

Atwater-Cosmos-Grove City 59, Morris Area/Chokio-Alberta 54
MORRIS – Morris Area/Chokio-Alberta shot just 37 percent from the floor and Atwater-Cosmos-Grove City avenged their playoff loss last year by beating the Tigers 59-54 in the home opener from the Tiger Centre.
Camden Arndt led with 14 points and five rebounds, Jackson Loge added 13 but the Tigers were just 4-22 from three-point range while turning the ball over 19 times.
The Tigers fall to 1-1 while the Falcons improve to 2-0.

West Central Area 59, Ashby 55
BARRETT – West Central Area erased a 16-point deficit to earn their first win of the year with 59-55 defeat of Ashby.
The Arrows led 22-8 early and held a 10-point second half lead before the Knights began to chip away, tying the game at 51.
Tied at 55 with a minute remaining, Gage Staples and Gavin Paulson each hit a pair of clutch free throws and the Knights locked down defensively to preserve the win.
Jack Van Kempen led the Knights with 14 points and eight rebounds, Staples added 12 points and eight boards and West Central improved to 1-1.
Scott Johnson had 15 points for the Arrows, Jaden Norby added 14 as they fall to 0-1.

Henning 75, Brandon-Evansville 47
EVANSVILLE – Henning caught fire early while holding Brandon-Evansville to just 28 percent shooting for a 75-47 win.
The Chargers were just 9-35 from the floor and 14-24 at the free throw line as they fall to 1-1. Sam Fuller and Marshall Riedel each scored eight points. The Hornets are 2-0.

Litchfield 79, Morris Area/Chokio-Alberta 48
LITCHFIELD – Litchfield erased a 14-point halftime deficit to defeat Morris Area/Chokio-Alberta 79-48 on Tuesday.
In a tale of two halves, the Tigers led 29-15 at the break, but shot just 39 percent and turned the ball over 26 times, getting outscored 54-19 in the second half.
Maddie Carrington led the Tigers with nine points, Malory Anderson had eight points with 11 rebounds, and Riley Decker chipped in with eight points as they fall to 2-1.
The Dragons are 1-1.

Brandon-Evansville 50, Hillcrest Lutheran 34
FERGUS FALLS – Brandon-Evansville overcame a slow start to defeat Hillcrest 50-34.
The Chargers fell behind early before battling back to pull within a point going into halftime, then took advantage of their size to pull away late from the Comets.
Haddey Zastrow had 15 points, Mikenna Pattrin added 12 and the Chargers are 2-1.
Hillcrest got 15 points from Kenzie Foss but fall to 0-3.