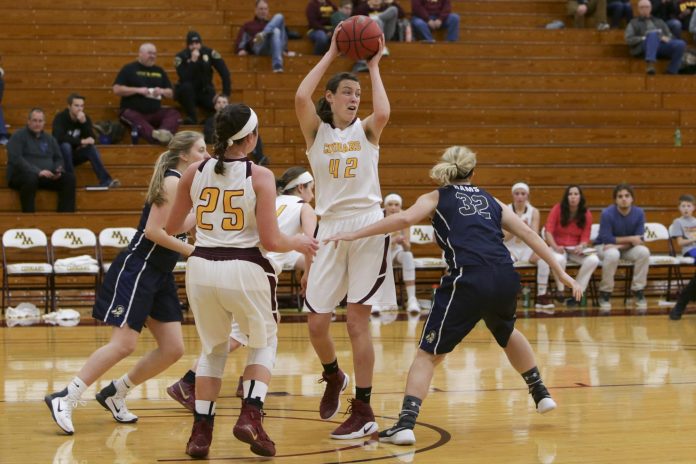 If Wednesday’s tilt against Crown College was an indicator, the Cougars are set for a strong year.

Exploding out of the gates with a 19-3 run in the first quarter, the Cougars never looked back in a 74-36 thumping of the Storm in the Upper Midwest Athletic Conference (UMAC) opener.

Kendra Raths was a big reason for the quick offense output in the contest. Within that 19-3 run to start the game, the Senior from Sartell, Minn lead the charge with 11 points. Raths finished the contest with a team-high 15 points while also strengthening her stance as being a major key in the paint. Her seven rebounds would also lead the team and also recorded a pair of blocked shots. To add to her strong showing, Raths also recorded three steals.

Minnesota Morris extended the lead to 34-7 late in the second quarter after a Emma Atkinson three-pointer. While the Cougars were relatively cold from three-point land (8-for-18), both Atkinson and Abby Van Kempen made the most of their attempts. Atkinson went 2-for-3 from beyond the arch to help guide her to eight points on 11 minutes while Van Kempen finished a perfect 2-for-2. In fact, Van Kempen’s offensive performance was unblemished. In 20 minutes of action, the junior forward was a perfect 7-for-7 from the floor, to include going 2-for-2 from the charity stripe. Van Kempen finished the contest with 14 points. She also grabbed three rebounds and blocked a pair of shots.

Crown finished the second quarter with with a quick three points to reach double figures for the first time in the contest, but the damage was done.

Not only did the Cougars hold the advantage in points off turnovers, but also had a strong showing from the bench, recording 23 points while Crown managed just four points. Minnesota Morris asserted their dominance in the paint, scoring 36 of their 74 points in the paint. In fact, the Cougars scored a total of 22 points in paint during the second and third quarter alone.

The Cougars would finish out the contest scoring 37 points in the second half. 25 of those points came in the third quarter which would also be the highest output for the contest.

On Saturday, the Cougars (4-4, 1-0 UMAC) will play host to the University of Wisconsin -Superior in a conference tilt. Tip-off is set for 3 P.M.