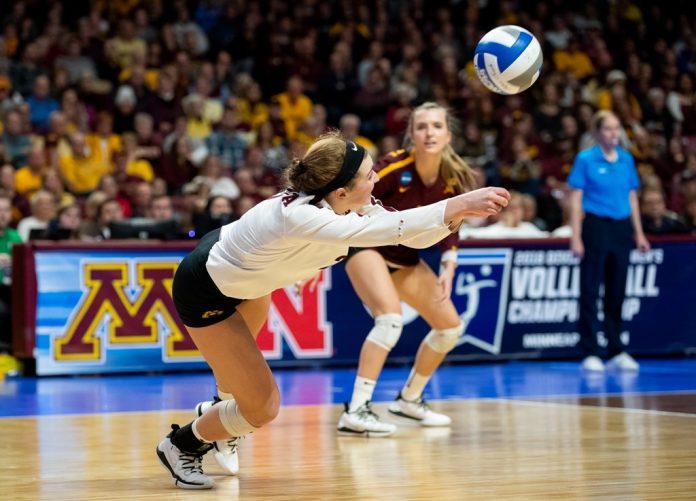 Adanna Rollins tallied her sixth double-double of the season with 14 kills and 13 digs, while Regan Pittman chipped in 12 kills. Samantha Seliger-Swenson registered 55 assists and ten digs to record her 12th double-double this season and 52nd of her career.

The Gopher seniors closed out their careers tonight in front of a crowd of 5,187. Four-year starter Samantha Seliger-Swenson finished her career with 5,674 assists, ranking fourth all-time in Gopher volleyball history.

WOMEN’S HOCKEY
MINNEAPOLIS — The line of Grace Zumwinkle, Taylor Wente, and Nicole Schammel combined for three goals and Emily Brown scored her third game-winning goal of the season as the No. 2 University of Minnesota women’s hockey team won 6-1 over visiting Robert Morris on Friday night at Ridder Arena.

Alex Gulstene made 20 saves in net for the Gophers as Minnesota outshot the Colonials, 27-21, for the game. On the other end of the ice, RMU’s Lauren Bailey finished with 21 saves.

The teams face off in game two of this week’s non-conference series at 1:07 p.m. CT Saturday afternoon at Ridder Arena.

The Wolverines claimed an additional Big Ten point by scoring with 12.1 seconds left in the 3-on-3 double overtime period. Josh Norris caught a puck on a breakaway and skated in unopposed on the open ice to give Michigan (6-6-4, 2-3-4-2) the bonus in the standings.

The Gophers Mat Robson finished with 38 saves during the game, stopping two more pucks in the 3-on-3 session. Mann hauled in 26 saves for Michigan.

The Gophers finished 0-for-3 on the power play while holding Michigan scoreless in a pair of chances with the man advantage.

The same two teams will close out the season’s first half on Saturday night from Yost.