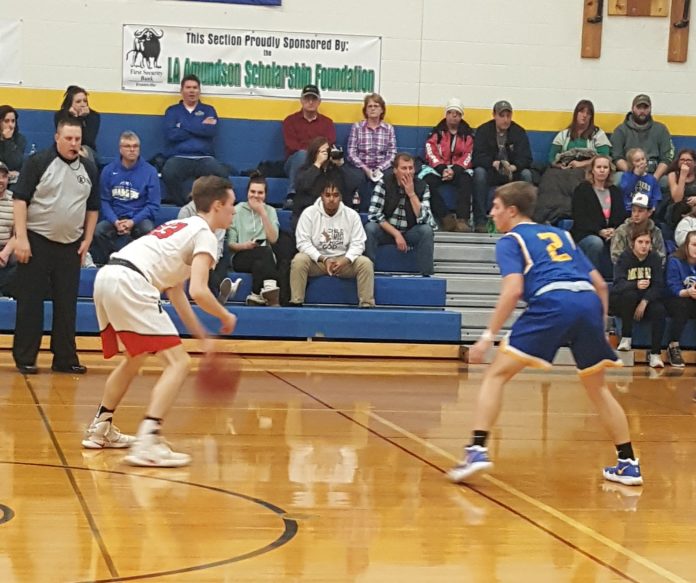 Brandon-Evansville 56, Hillcrest Lutheran 51
EVANSVILLE – Marshall Riedel’s three-pointer from the corner with 1:35 remaining gave Brandon-Evansville a 52-51 lead, and the Chargers closed the game on a 10-0 run for a 56-51 win over Hillcrest Lutheran.
Trailing by four in the closing minutes, Sam Fuller was fouled on an offensive rebound put-back bucket that pulled the Chargers within two. He missed the free throw but Tanner Bitzan grabbed the rebound and kicked it to Riedel for the go-ahead three. Bitzan went 4-4 from the line in the final minute to seal the win.
Bitzan had a double-double with 14 points and 14 rebounds, Fuller had 14 points and eight boards, while Riedel added 13 points.
Sander Frustol had 18 points and 10 rebounds for the Comets who fall to 1-1. The Chargers are now 3-1.

Hancock 70, Underwood 42
UNDERWOOD – Hancock had four players score in double-figures and shot 50 percent from the field in a 70-42 rout of Underwood.
Bennett Nienhaus hit seven threes to finish with 27 points, five assists, and six steals. Cole Reese had a double-double with 10 points and 10 assists, and six rebounds, Peyton Rohloff added 11 points, Connor Reese chipped in with 10.
Krosby Aasness led the Rockets with 12 points, Winston Heifort had 10 as they fall to 1-2. The Owls remain unbeaten at 3-0.

Morris Area/Chokio-Alberta 61, Atwater-Cosmos-Grove City 20
MORRIS – Morris Area/Chokio-Alberta took a 30-point lead into halftime, and completed the rout of ACGC 60-21 on Tuesday at the Tiger Center.
The Tigers shot 54 percent with a balanced attack on offense, getting 11 points from Malory Anderson, 10 apiece from Sophia Carlsen and Maddie Carrington, nine from Riley Decker and Kylie Swanson, with Kendra Wevley chipping in with eight.
The Tigers are now 3-2 while the Falcons fall to 2-5.

Hancock 58, Dawson-Boyd 31
DAWSON – Hancock dominated the second half to turn a one-point halftime lead into a blowout victory with a 58-31 win over Dawson-Boyd.
Lexi Staples led the Owls with 19 points and seven rebounds, Haley Mattson scored 18, and Carlee Hanson had 12 with nine boards as the Owls improve to 2-0.
Avery Bartunek led the Blackjacks with 11 points as they fall to 2-3.

Morris/Benson Area 4, Willmar 2
BENSON – Zach Bruns scored twice in his season debut to lead Morris/Benson Area to a 4-2 win over Willmar in Benson on Tuesday.
Bruns, who missed the first three games while healing up from a broken collarbone suffered during the football season scored twice in the opening 5:35 of the first period, and assisted on Jack Riley’s goal at 8:54 to give the Storm a 3-0 lead.
Mike Halvorson added a third period goal, Kolby Goff had two assists, Tyler Buss and Brady Loge each added a helper while Peyton LeClair turned back 36 shots and the Storm improved to 1-3.
Eldridge DeKraai had two points and Gunner Banks made 22 saves as the Cardinals fall to 0-3-1.

Prairie Centre 11, Morris/Benson Area 0
MORRIS – Prairie Centre scored early and often in a 11-0 rout over Morris/Benson Area.
Allie Lemke recorded a hat trick, Shelby Otte scored twice with an assist and Mackenzie Och stopped all nine shots she faced as the Blue Devils improved to 5-5.
Leah Thompson made 27 saves for the Storm who fall to 2-9.