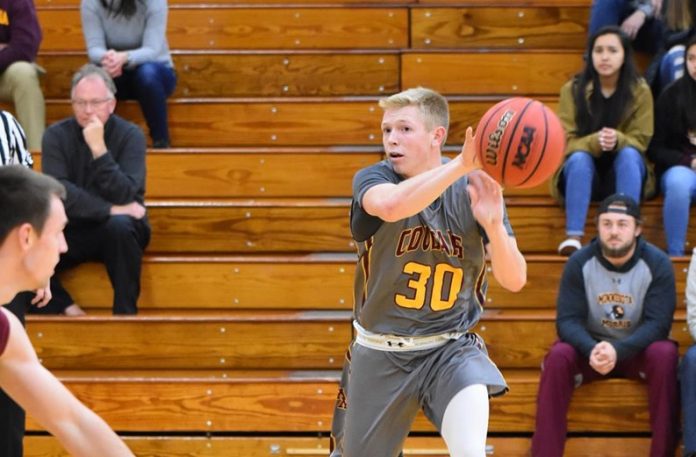 MEN’S BASKETBALL
MINNEAPOLIS – Looking to string a pair of strong performances back-to-back, the University of Minnesota Morris men’s basketball team made the quick jaunt down I-94 to Augsburg University.

After a 99-67 nonconference loss to Augsburg, the Cougars will have to quickly shore up some deficiencies before heading back into conference play. .

The Auggies started the contest off red hot, exploding to a 31-6 run just 8 minutes into the contest. Much of the run can be credited to the sharp shooter-like accuracy beyond the arch. In fact, of those 31 points, 27 came from three-point territory. For the game, Augsburg would tie the school’s record in three-pointers with 18. As for the Cougars, nothing seemed to fall early, missing their first four attempts from the floor. Kenneth Riley’s lay up at the 16:29-mark of the first half halted the Auggies’ 16-0 run.

The Cougars would continue to battle, but the massive run to start the half proved too much to recover from.A blend of streaky shooting and turnovers proved to be the deciding factor. In the first half alone, Minnesota Morris shot just 34.5 percent from the floor and went 4-for-15 from beyond the arch. They would also have 12 turnovers. Aside from the hot shooting from the Auggies, the Cougars kept the contest fairly competitive when looking at the analytics of the game. Augsburg held a slim 23-14 points off turnover advantage and a 17-13 advantage in 2nd half points. The Auggies held a slim advantage in points in the paint with a single basket lead (30-28).

The Cougars were able to hold a massive advantage in points off the bench.

Trent Jerome was a big reason for that.

Playing just eight minutes in the first half, Trent scored five points, going 2-for-3 from the floor. For the game, Trent led the Cougars with 12 points in 18 minutes of action. He was also the only player to reach double figures. Riley, and Tath Dak also had strong performances off the bench for the Cougars. Riley scored eight points in 31 minutes of action while Dak recorded nine points on 23 minutes.

It was a completely different game for the Cougars in the final half of play. From the floor, they shot 42.4 percent and committed just six turnovers.

The Cougars will be back in UMAC action Sunday in Duluth against St. Scholastica. Tip-off is set for 4:45 P.M.