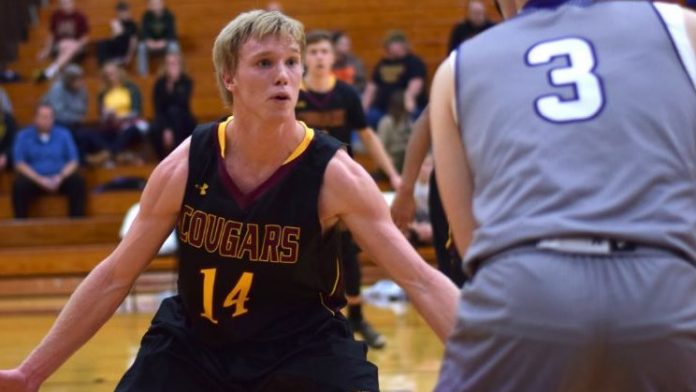 WOMEN’S BASKETBALL
DULUTH, Minn. – The University of Minnesota Morris women’s basketball team has endured a December that at times was a roller coaster, going 2-2 and sported a UMAC record of 1-1 heading into Sunday’s contest against the College of St. Scholastica.

After a 61-41 win over the Saints, the Cougars will certainly have a chance to enjoy the holidays prior coming back for competition.

Starting the game on a 15-3 run, the Cougars defense appeared to cause fits for the Saints early on, forcing a trio of turnovers that immediately converted into points. a big key in that 15-point onslaught early was junior forward Abby Van Kempen and senior guard Elli Stevenson. Van Kempen registered four points during the opening run of the contest while the run seemingly provided Stevenson the time to get into rhythm. Stevenson led all scorers in the first half with 12 points after going 5-of-13 from the floor.

The Cougars held a double-digit lead for much of the quarter. Then it appeared that St. Scholastica started to wake up.

The Saints were able to sneak within a single possession of the Cougars at the 7:26-mark of the second quarter until Stevenson would score points to help provide a 29-22 lead with just over a minute left in the half.

The Cougars also had a strong showing when it came to converting on second chances. Despite being out-rebounded, Minnesota Morris scored 13 points off second chance opportunities. Leading the charge was Van Kempen, who registered a game-high 11 rebounds to collect her second double-double of the season. The Cougars also had an advantage in points in the paint, scoring 30 of their 61 from down low.

Minnesota Morris (5-5, 2-1 UMAC) will be back after the holiday break to play host to St. Catherine University Dec.29. Tip-off is set for 3 P.M.

MEN’S BASKETBALL
DULUTH, Minn. – After a tough loss at Augsburg handed the University of Minnesota Morris men’s basketball team its fourth loss in the month of December, the Cougars were back into UMAC play with a match up against the Saints.

The Holiday break will be a little more enjoyable for members of the Cougars.

Rolling to a 75-69 win over the College of St. Scholastica Sunday, Minnesota Morris was able to reclaim some of the ingredients to being a formidable opponent to face.

One of those ingredients, is having members of the bench putting up points and forcing turnovers.

After struggling to score just two points in the first half, Noah Grove exploded in the second half, scoring a team-high 13 points. In fact, after Pendleton was the lone Cougar to reach double figures in the first half, four Cougars – to include Grove – would reach the mark in the final half of play. Jeremy Halverson scored 12 points while Trey Heinsuis and Jerome added 10 and 11 respectively. Pendleont would finish with 12 points and three steals in 34 minutes of action.

Minnesota Morris boasted a double digit lead for much of the second half. In fact, it wasn’t until the 9:59-mark of the half that the Saints were able to make it a one possession contest. From there, the Cougars had to do something that prior to that point they didn’t need to do… battle back from a deficit.

The Saints would take the lead just two minutes later until Grove connected his only three-pointer of the contest to regain the lead to help spark a run that would lead to the ultimate decision.