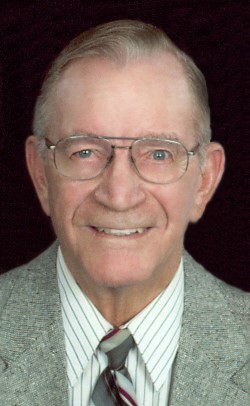 Funeral Services for LeRoy Behrens will be held Friday, December 21, 2018, at 11:00 a.m. at St. John Lutheran Church in Wheaton with Rev. Michael Breach officiating. Organist will be Theresa Thiel. Visitation will be held Friday morning one hour prior to service time at the church. Interment will be in St. John’s Lutheran Cemetery, Dumont, Minnesota. Pallbearers will be Dean Peyton, Dustin Peyton, Garrett Behrens, Carter Behrens, Ryan Silbernick, and Paul Behrens. Military Rites will be provided by the Merton Dale American Legion Post #80.

Leroy J. Behrens was born March 7, 1922, at the family farm in Leonardsville Township, rural Johnson, Minnesota, to John and Sophia (Fuhrman) Behrens. He was born prematurely so he was baptized the same day. He was confirmed at Trinity Lutheran Church near Johnson, Minnesota. He attended country school in Leonardsville Township completing the eighth grade. His family moved to Dollymount Township where he helped on the farm before being drafted in to the United States Army on November 29, 1944. He served until his honorable discharge on August 2, 1946. For his service he received the Victory Medal, European African Middle Eastern Theatre Ribbon, two Overseas Bars, Army of Occupation Medal (Germany), and the Good Conduct Medal.

Leroy returned home after his service and began farming on his own. He was united in marriage to Pearl Rusch on December 13, 1958, at St. John Lutheran Church in Wheaton. Together the couple were blessed with four children. The couple continued living and farming in Dollymount Township until 1990 when they moved into Wheaton. Leroy continued farming until 2007 when he “officially” retired at the age of 85. He was however often seen around the farm after that, helping wherever he was able.

The Bainbridge Funeral Home of Wheaton, Minnesota, is in charge of arrangements.