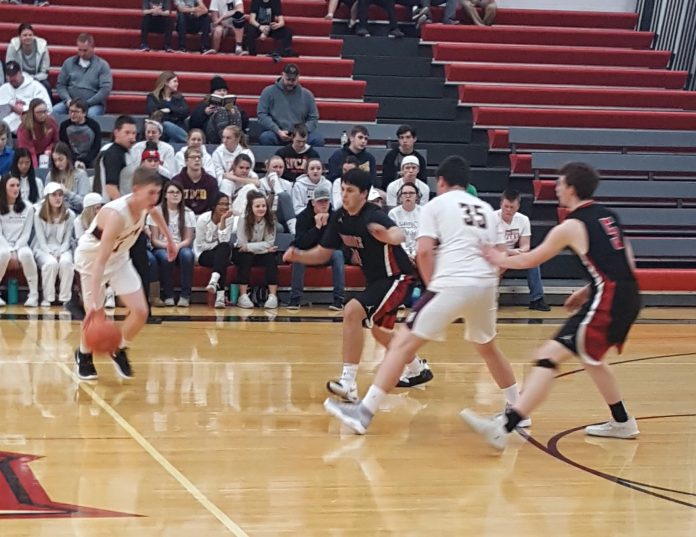 Morris Area/Chokio-Alberta 78, Montevideo 46
MONTEVIDEO – Jackson Loge scored 20 points with 13 rebounds and three blocks to lead Morris Area/Chokio-Alberta past Montevideo 78-46.
Loge shot 10-13 from the floor while teammate Jaret Johnson went 9-11 to finish with a game-high 21 points.
The Tigers shot 58 percent as a team and got 14 points from Camden Arndt who also dished six assists, Eli Grove added 10 points off the bench and the Tigers are 3-3.
The Thunderhawks fall to 0-6.

Hancock 57, West Central Area 56
BARRETT – In a game that featured 13 lead changes and six ties, it was the Hancock Owls who escaped Barrett with a 57-56 victory over West Central Area.
Bennett Nienhaus hit five threes and led all scorers with 19 points, Conner Reese had 13, and Daniel Milander added 10 with six rebounds.
The Owls trailed 36-31 at the break, but opened the second half on a 9-0 run while the Knights, who shot 58 percent in the first half, went just 1-10 to start the second before  hitting their next five shots to reclaim the lead.
The teams went back-and-forth until Grant Beuckens jumper at the buzzer fell short and the Owls earned coach Cory Bedel his 100th win.
Cole Reese dished nine assists with three steals and six points, Peyton Rohloff scored six with 10 rebounds and Hancock is now 6-0.
Teigen Mortiz led the Knights with 14 points with eight boards, Jack Van Kempen had 10 points, 10 rebounds, Beuckens and Jacob Bright each scored eight, and Tate Christenson added nine off the bench as they fall to 3-2.

Atwater-Cosmos-Grove City 71, Minnewaska Area 67
GROVE CITY – Ryan Amundson scored 25 points with four assists, but Minnewaska fell from the ranks of the unbeaten with a 71-67 loss to Atwater-Cosmos-Grove City.
Shawn Carsten had 12 points with 12 rebounds and Aaron Ver Steeg added 10 as the Lakers fall to 5-1.
Dawson Miller had 25 points and Steve Lawver added 22 for the Falcons who are 4-3.

Wheaton/Herman-Norcross 83, Frazee 67
HERMAN – Wheaton/Herman-Norcross shot 55 percent and got 33 points from Hunter Johnson in an 83-67 win over Frazee.
Johnson shot 14-21 from the floor and dished out six assists. Matt Thielen had 18 points with eight assists, and seven rebounds, Nick Lupkes and Zach Stueve each scored 10 for the Warriors who are 2-4. The Hornets fall to 1-4.

MACCRAY 48, Hancock 31
HANCOCK – MACCRAY hit 8 of 16 three-pointers and earned a 48-31 win over Hancock.
Piper Asche had 16 points for the Wolverines, Sage Mecker added 15 to move to 4-5.
The Owls were just 1-13 from long range, getting eight points, five rebounds, and five steals from Lexi Staples, Rylee Hanson had six points but the they fall to 2-3.

Brandon-Evansville 50, Battle Lake 42
EVANSVILLE – Brandon-Evansville held Battle Lake to 11 first half points, and hung on for a 50-42 win in Evansville.
Sara Jacobson scored nine points on 4-8 shooting, Mikenna Pattrin had eight with six rebounds, and Kerryn Lund added seven for the Chargers who won their sixth straight to move to 6-1 on the season. The Battlers fall to 1-5.