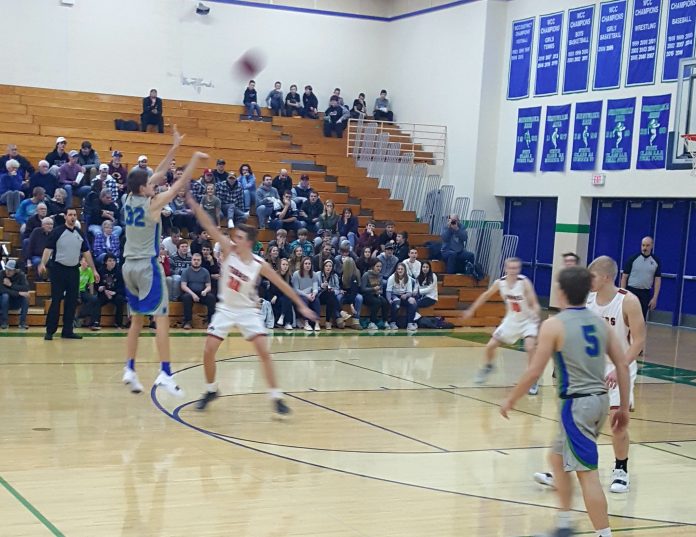 Minnewaska Area 49, Morris Area/Chokio-Alberta 37
GLENWOOD – Grant Jensen scored 23 points and Minnewaska held Morris Area/Chokio-Alberta to just 36 percent shooting and the Lakers earned a 49-37 win on Thursday.
Shawn Carsten had 15 points with eight rebounds for the Lakers who opened the game on an 18-3 run, hitting 8-10 shots while the Tigers struggled, going just 2-12.
Minnewaska built their lead to 16 in the second half before the Tigers started chipping away to pull within six, but the Lakers scored the next four points and held on from there.
Jackson Loge had 14 points, five rebounds, and two blocks for the Tigers, Jaret Johnson scored eight and Zach Hughes added seven as they fall to 3-4. The Lakers are now 6-1.

Hancock 57, Ortonville 45
HANCOCK – Carlee Hanson had 13 points and five assists to lead Hancock past Ortonville 57-45 on Thursday.
Rylee Hanson grabbed 13 rebounds while scoring nine, Morgan Kisgen and Haley Mattson each added 11 points for the Owls who grinded out a victory in a game that featured 59 free throws to improve to 3-3. The Trojans are 4-2.

Prairie Centre 9, Morris/Benson Area 3
MORRIS – A six-goal second period proved too much to overcome for Morris/Benson Area in a 9-3 loss to Prairie Centre from the Lee Community Center in Morris on Thursday.
The Stars led 3-0 at the first intermission, then exploded for six in the second period, before the Storm got three back in the third.
Kolby Goff, Matt Tolifson, and Hunter Blume each scored goals for the Storm, while Jack Riley, Brady Loge, Brady DeHaan, and Reece Kuseske tallied assists.
Chase Engebretson started in net, but was pulled after allowing three goals on three shots. Peyton LeClair stopped 18 shots in relief for the Storm who fall to 3-4.
Hunter Fletcher had two goals and three assists while Isaiah DeFoe stopped all 17 shots he saw through two periods as the Stars improve to 6-4.