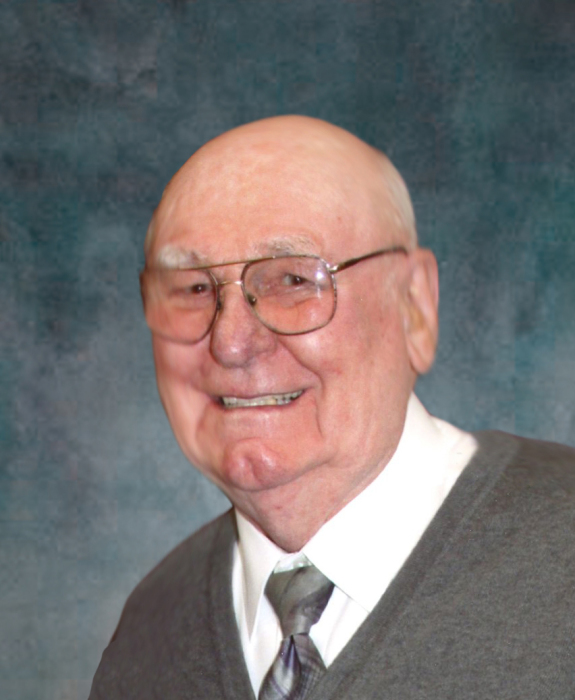 The funeral for Virgil Sauder will be held on Thursday, December 27, 2018, at 10:00 a.m. at the Apostolic Christian Faith Church, Hancock.  Visitation will be on Wednesday from 4 to 7 p.m. at the Pedersen Funeral Home in Morris and Thursday, one hour prior to the service at the church. Burial will be at the Apostolic Christian Faith Cemetery, Hancock.

Virgil Verne Sauder, son of George and Emma (Traub) Sauder, was born on March 7, 1924, on the family farm near West Bend, IA.  He grew up and attended school near West Bend, IA, until the 10th grade. Following his schooling, he began working with his father harvesting ice and doing carpentry.  He was drafted into the United States Army in 1943 where he served in New Guinea during World War II.  He was honorably discharged on January 20, 1946, and returned to West Bend IA.  He was united in marriage to Mildred Wulf on December 11, 1946. Following their marriage, they operated a restaurant in West Bend for a short time before moving to the Lester, IA, area where they worked for several farmers.  In 1956, they relocated to the Morris area where they worked for the Leonard Wulf Family in farming.  In 1988, they moved to Morris and Virgil continued to work on the farm.  Mildred passed away on August 31, 2014.  Virgil continued to live in Morris until the time of his death.

Virgil was a member of the Apostolic Christian Faith Church.  He enjoyed fishing, and playing games.  Most of all, Virgil enjoyed spending time and making special memories with his family and friends.

Pedersen Funeral Home in Morris in in charge of arrangements.