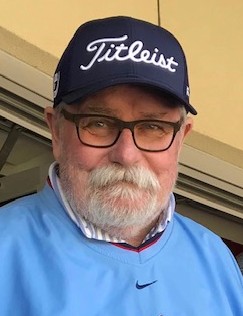 Funeral services for Quentin “Quent” Lee, Jr. will be held on Monday, December 31, 2018, at 11:00 a.m. at Our Savior’s Lutheran Church in Chokio.  Minister Minette Stahlheim Johnson will be officiating.  Visitation will be on Sunday from 1:00 to 3:00 p.m. at Our Savior’s Lutheran Church and will continue one hour prior to the services at the church on Monday.

Quentin Albert Lee, Jr. son of Quentin and Gervaise (Spanton) Lee was born on April 21st 1947 in Milbank, South Dakota. Quent grew up and attended school in Milbank, (as Q always said; Home of Legion Baseball) graduating in 1965. Following graduation he attended college at the University of South Dakota, Vermillion. After attending college at USD; Quentin enlisted in the United States Air Force and served 4 years at Offutt Air Force Base in Omaha where his love of golf began. After his time in the military he moved to Colorado to work for his brother-in-law at the Eisenhower Tunnel. It was there that he met his future wife, Jennie, who thought he had the coolest record collection in town. The couple moved back to Milbank, SD where Quentin rejoined Lee Well Drilling with his brother David. He and Jennie were married in 1981 and shortly after made their home in Chokio, MN. The couple welcomed their son, Jack, in 1983 and daughter, Kate, in 1986.

Quent enjoyed attending Jack’s guitar performances and Kate’s softball and volleyball games.  After 32 years of “being on call” 24/7 he was extremely content to watch those snowstorms happen knowing he didn’t have to get a pump started in freezing temps and a howling wind on Christmas Eve. His retirement began in 2012 followed by the birth of their first grandchild. His grandchildren gave him great joy and he was just starting to work on Charlie’s golf game this past summer. Quentin loved the Graceville Golf course where he won numerous tournaments and was able to hit a hole in one 3 times. Every spring he looked forward to working on his stroke and would always say he was a darn good golfer for “a short fat guy.” Quentin could usually be found at Spaulding’s Sports Bar where he and his buddies would shake dice and bet on football and baseball games. The music of the Grateful Dead and other jam bands were a huge part of his life and he even attended a Dead show with his grandkids this past October.

He was preceded in death by his parents, Quentin and Gervaise (Spanton) Lee.

Funeral arrangements for Quentin Lee, J., are with the Pedersen Funeral Home in Morris.