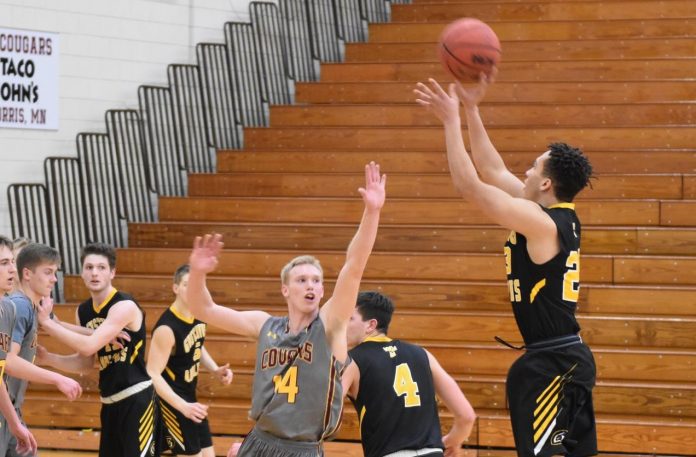 MEN’S BASKETBALL
MORRIS – After a brief holiday break that featured winter storm Eboni blanketing much of the West Central region of Minnesota in snow, the University of Minnesota Morris Men’s basketball team were back in action to host to Gustavus Adolphus College in non-conference matchup.

While temperatures outside were below zero for much of the day, the Cougars appeared to warm up quick inside the P.E. Center, sustaining a double-digit lead for much of the second half.

However, the Gusties appeared to heat up at the right time.

After Logan Rezac knocked down a game-tying three pointer with five seconds remaining, the Gusties were able to fend off a Cougars comeback in overtime to escape with a 74-71 win Saturday.

Despite getting off to a slow start, the Cougars were able to quickly capture their first lead after a fast break basket by Trey Heinsuis. After trading a few baskets, Noah Grove connected on a pair of free throw attempts to give Minnesota Morris a 17-14 lead midway through the half. From there, the Cougars were able to establish a rhythm. Heinsuis was able to provide a quick spark for the Cougars, scoring five straight points to extend the Cougars lead to 23-16. The senior from Brooten, Minn. would finish the contest with 15 points and four steals.

One area the Cougars were effective was the ability to get to the charity stripe. In a first half that saw five different players reach the line, Minnesota Morris capitalized, connecting on 13-of-their-16 attempts. In fact, Nick Peterson (4-for-4), Jeffrey Halverson (2-for-3), and Grove (5-for-6) each connected on multiple attempts. Minnesota Morris would take a a 38-33 lead into the half.

The second half provided plenty of attempts for the Cougars to be in a fight early, but the Gusties were unable to capitalize, coming within one possession of regaining the lead on multiple occasions. However, the Cougars were able to go on a 6-2 run to extend the lead to 56-49. Gustavus was able to tie the game at 57-57 with just over 5 minutes left in the game. For the Cougars, it was an inability to receive any sort of support from the bench. Gustavus recorded 32 points from the bench to Minnesota Morris’ eight. In fact, the Cougars bench accounted for just three points in the second half. For the remainder of the half, the two squads would trade jabs at attempting to blow the game open until Rezac’s game-tying three pointer.

In the overtime session, the Cougars were able to quickly jump out to a four point lead until the Gusties were able to make a 8-0 run to regain a commanding 73-69 lead with just under two minutes left in the contest. James Pendleton’s layup was able to pull Minnesota Morris back into a one-possession game. Pendleton had a great showing for the Cougars, scoring a game-high 17 points while also dishing five assists. Grove also reached double-figures for the Cougars, scoring 13 points and Jeffrey Halverson was one rebound shy of achieving a double-double for the contest. He finished with 12 points and nine rebounds.

WOMEN’S BASKETBALL
MORRIS – Looking to extend the winning ways to two straight games, the University of Minnesota Morris Women’s basketball team was back on campus after the holiday break to play host to St. Catherine University.

It was a contest filled with inconsistent shooting and turnovers from both teams. Unfortunately, the Cougars’ rally started a few possessions too late.

Attempting to fight back from a 54-47 deficit late, the Cougars simply ran out of time, falling to the Wildcats 55-50 inside the P.E. Center on Saturday in non-conference action.

Whether it was just the level of defense being played or the brutal cold that plagued much of the Morris area after winter storm Eboni, both teams struggled to find the bottom of the net in the first half. In fact, after Abby Van Kempen’s layup just a seconds into the contest, the fans in attendance had to wait nearly two minutes for the next basket to fall. In a first quarter that saw the scored end at 12-9, both teams combined for 12 turnovers. With just about three minutes remaining in the quarter, the Wildcats started to gain some momentum, building a 12-7 lead until Elli Stevenson drained a pair of free throw attempts to cut the lead to one possession.

While they engaged to only surrender six second chance points in the final half of play, nine points were surrendered in the first half compared to the Cougars’ four points. Minnesota Morris also struggled with stopping the points in the paint, allowing the Wildcats to score 26 of their 55 points from down low.

The Cougars were able to mount a comeback in the second quarter after falling behind 21-14 to cut the halftime deficit to four points. In the second half, Minnesota Morris was able to take their first lead of the contest on a pair of Kendra Raths free throw attempts. From there, the Cougars were able to maintain at least a two possession lead for much of the third quarter, thanks in large part of the play from Raths, Stevenson and Van Kempen. The Senior from Elbow Lake registered a double-double after grabbing a game-high 14 rebounds and scoring 12 points.

After a strong third quarter, the Cougars began to see similar struggles that plagued them in the first half and would fall behind 47-43 late in the contest prior to attempting mount the final surge.

Stevenson finished the contest with a team-high 14 points while Raths recorded 13.