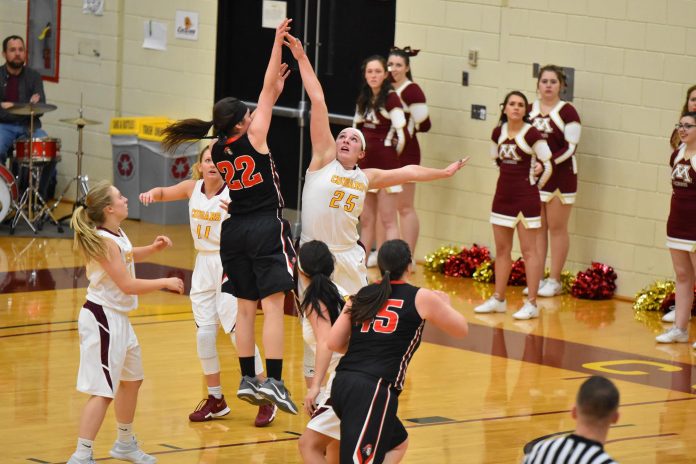 It was a battle for much of the first half as both teams were deadlocked at 29-29 heading into halftime.

Then the duo of Kendra Raths and Elli Stevenson started to heat up.

Each reaching double figures, Raths scored 19 points and Stevenson added 16 as Minnesota Morris managed to fend off the Vikings 76-67 inside the P.E. Center in UMAC action Wednesday night.

The Cougars held a 55-46 lead after Lexus Eagle Chasing knocked down a three-pointer just 23 seconds into the quarter. From there, back-to-back baskets from Becca Holland and Raths help keep the lead to a three possession contest at 59-51. It seemed as if the Vikings were going to be able to mount a comeback, pulling to within five points until Stevenson twisted her way to the basket for the lay up. Raths would add a lay up of her own at the 2:22-mark of the quarter. However, it appeared that Bethany Lutheran was going to be within striking distance of regaining the lead late, trailing only by four until the Cougars’ big three of Stevenson, Raths and Abby Van Kempen would close out the contest.

It was a good showing for the Cougars’ big three as Raths, Stevenson and Van Kempen each reached double-figures. In fact, Raths and Van Kempen each recorded 19 points and grabbed nine rebounds. A special moment with just 28 seconds remaining as Raths connected on the first of a pair of attempts from the charity stripe. With that first successful attempt, she joined Stevenson in the exclusive 1,000 career points club. It was a slow start for the duo of 1,000-point scorers in the first half however, as they combined for nine points in the first half.

Aside from scoring 16 points off 19 Vikings’ turnovers, the biggest factor in the Cougars success tonight was the ability to simply dominant in the paint. Raths and Van Kempen were simply unstoppable underneath, managing to follow up missed shots with quick put backs or simply hauling in the offensive rebound. The Cougars scored 40 of their 76 points in the paint while limiting the Vikings to just 22 on the defensive end. Much of Minnesota Morris’ success in the first half could be attributed to the senior forward in Van Kempen. In 10 minutes of action, she led the team with 11 points after going 5-for-6 from the floor.

Minnesota Morris (6-6, 3-1 UMAC) will be back in action Saturday, with a UMAC tilt against North Central University. Tip-off is set for 3 P.M. in Minneapolis.

MEN’S BASKETBALL
MORRIS, Minn. — The University of Minnesota Morris men’s basketball team was looking to start 2019 off with its third-straight win over a UMAC opponent, playing host to Bethany Lutheran College Wednesday night.

At the half, it appeared that the Cougars were certainly on their way to doing just that.

Then the Vikings woke up.

In the first half, the Cougars seemed to be simply one step ahead of their opponents, playing smothering defense. In fact, Minnesota Morris was able to create 12 Vikings turnovers in the first half, four of those coming by ways of steals from Kenneth Riley, Jeremy Halverson and a pair from Noah Grove. On the offensive end, the Cougars started off hot, starting the game with a 8-2 run. However, from there, the Vikings started to slowly work their way back into the game and at the 14:15-mark of the first half, saw themselves with their first opportunity to lead the contest.

That was shot lived as the Cougars mounted yet another quick 8-2 run to turn a 13-12 deficit into a 22-15 lead. The Vikings would be in striking distance of regaining the lead on two separate occasions shortly following, however the tenacious motor of Grove and the sharpshooting from Jeremy Halverson appeared to be just too much. The Cougars ended the half with an 11-2 run with six points coming for the senior guard.

The second half was a completely different story as the Cougars went cold while the Vikings quickly heated up. After shooting 50 percent form the floor in the first half, Minnesota Morris shot a dreadful 36.5 percent in the final half of play and went from shooting almost 36 percent from three in the first half to 23.5 in the second. The Cougars also struggled with second chance opportunities, scoring just three points in the second half off the missed initial attempt.

Despite the cold spurt, the Cougars were still neck and neck with the Vikings for much of the second half, as the largest lead prior to the final minute was seven points. Trailing by four with just over three minutes remaining, Trey Heinsuis’ lay up brought the deficit to two. As the score remained mainly a five-point affair, Jeremy Halverson’s three-pointer with 37 seconds left saw the Cougars trail by one, 85-84. However, a pair of successful trips to the charity stripe for the Vikings would seal the fate for Minnesota Morris as Grove’s three-pointer at the buzzer fell just short.

It was fantastic showing for the senior guard from Morris, Minn. scoring a team-high 26 points. Jeremy Halverson and James Pendleton also had strong showings, scoring 16 and 12 points respectively.

The Cougars (4-8, 2-2 UMAC) will be back in action Saturday as they face North Central University in a UMAC tilt. Tip-off is set for 4:45 P.M. in Minneapolis.