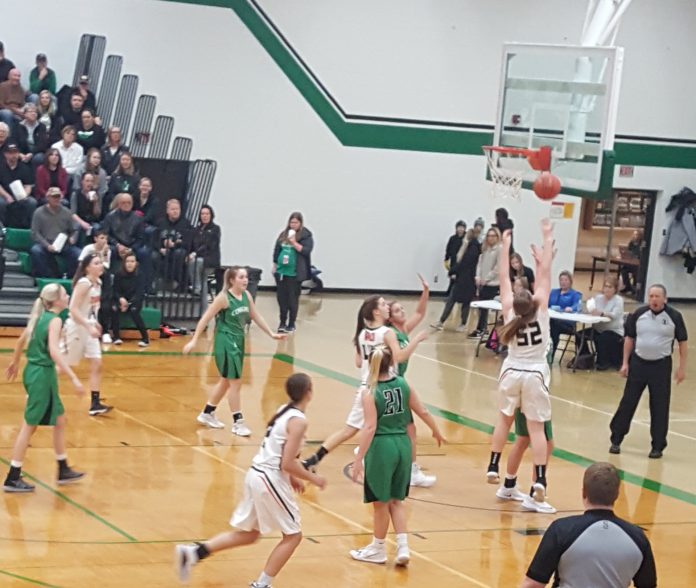 Breckenridge 69, Morris Area/Chokio-Alberta 66
BRECKENRIDGE – In a game that featured 20 lead changes and five ties, Morris Area/Chokio-Alberta came up short in Breckenridge, falling 69-66 on Thursday.
Malory Anderson provided the muscle in the post with 20 points and 14 rebounds, while Riley Decker had the hot hand from the outside with five threes to finish with 19 points for the Tigers.
Trailing by four at halftime, the Tigers opened the second half on a 7-0 run, only to have the Cowgirls answer with a 6-0 run of their own, and the two teams went back-and-forth for the game’s final 10 minutes.
Down 63-62, Breckenridge used a late 5-0 run to pull ahead and held on for the win.
Ashton Kaehler led the Cowgirls with 21 points, Jude Held had 17, and Chase Yaggie added 15 with seven rebounds as they improve to 7-3.
Maddie Carrington added 12 points for the Tigers who fall to 4-5.

Hancock 49, Rothsay 48
ROTHSAY – Haley Mattson scored 13 points, Carlee Hanson added 11 and Hancock grinded out a 49-48 victory over Rothsay.
Both teams overcame shooting struggles throughout the night, but the Tigers 2-15 shooting from long range proved too much.
Morgan Kisgen scored nine and Lexi Staples pulled down eight rebounds as the Owls improve to 4-3.
Jayna Gronewald had 20 points to lead the Tigers who are 1-9.

Breckenridge 78, Morris Area/Chokio-Alberta 58
BRECKENRIDGE – Breckenridge used an 11-0 run in the opening minutes to grab control of the game, and cruised to a 78-58 win over Morris Area/Chokio-Alberta.
The Tigers turned the ball over 32 times, including 21 in the first half, and never got into an offensive rhythm against the Cowboys suffocating defense.
Jackson Loge recorded a double-double with 19 points and 14 rebounds, Camden Arndt had 10 points but the Tigers fall to 3-5 on the season.
Noah Christensen had 24 points and 11 rebounds for Breckenridge who is 5-3.

Belgrade-Brooten-Elrosa 61, Hancock 60 (OT)
HANCOCK – Belgrade-Brooten-Elrosa handed Hancock their first loss of the season with 61-60 win in overtime.
Both teams held 15-point leads, only to watch the other rally back to tie or take the lead. The Owls shot 48 percent but were just 5-20 from three-point range, while the Jaguars connected on 9-18 from long range.
Cole Reese scored 17 points, Connor Reese added 13, Peyton Rohloff had 10 with eight rebounds, and Bennett Nienhaus filled the stat sheet with 10 points, five rebounds, five assists, and six steals.
It was the first loss in Hancock for the Owls since January of 2016, as they fall to 6-1 on the year.
Ashton Dingman led the Jaguars with 24 points, Evan Weiner added 15 and BBE is 5-2.

West Central Area 69, Park Christian 52
BARRETT – Teigen Moritz posted a double-double with 12 points and 12 rebounds to lead West Central Area past Park Christian 69-52 in Barrett.
The Knights overcame a cold shooting night by forcing 19 turnovers and grabbing 14 offensive rebounds.
Grant Beuckens had 19 points and six assists, Jack Van Kempen added 17 points with seven rebounds, and four steals as the Knights improve to 6-3.
Ian Ziebarth had 13 for the Falcons who fall to 3-6.

Ashby 81, Wheaton/Herman-Norcross 32
ASHBY – Scott Johnson led four Arrows in double-figures with 21 points to lead Ashby past Wheaton/Herman-Norcross in a rout, 80-32.
Christian Norby had 17 points, Jaden Norby had 12, and Hunter Norby added 10 for the Arrows who scored 26 points off 19 Warriors turnovers. Ashby is 5-2.
Matt Thielen had seven points for the Warriors who shot just 25 percent, Nick Lupkes added six as they fall to 2-5.

Prairie Centre 10, Morris/Benson Area 0
SAUK CENTRE – Kylee Hopp scored five goals to lead Prairie Centre to a 10-0 rout of Morris/Benson Area in Sauk Centre on Thursday.
Shelby Otte had two goals and an assist and Mackenzie Och stopped all 11 shots she faced as the Blue Devils improve to 8-7.
Leah Tompson made 20 saves for the Storm who are 3-12.