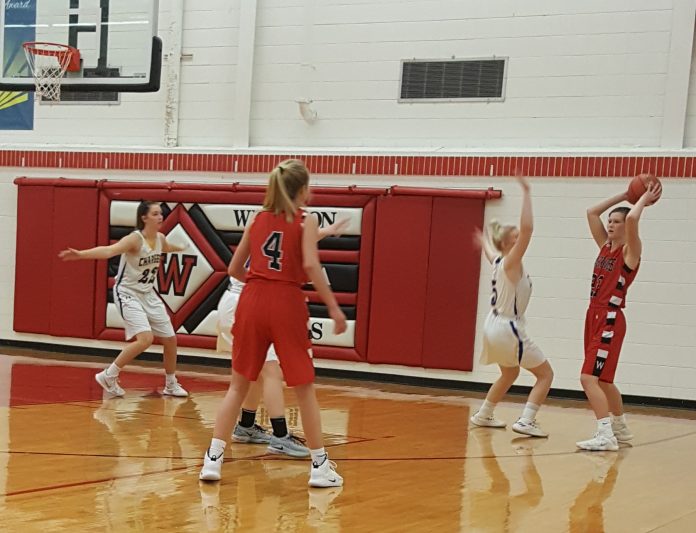 Morris Area/Chokio-Alberta 62, Melrose 48
MELROSE – Maddie Carrington led four Tigers in double-figures with 13 points, and Morris Area/Chokio-Alberta bounced back from a loss on Thursday to defeat Melrose 62-48 on Friday night.
The Tigers shot 47 percent and got 11 points each from Riley Decker, Kylie Swanson, and Malory Anderson, with Anderson adding 11 rebounds.
The Tigers are now 5-5, 2-3 in the West Central Conference, while the Dutchmen fall to 3-7 overall.

Brandon-Evansville 61, Wheaton/Herman-Norcross 54
WHEATON – Brandon-Evansville fought off a furious rally by Wheaton/Herman-Norcross to earn their eighth straight win 61-54 over the Warriors on Friday.
The Chargers led by double-digits for much of the game, and by as many as 19 before the Warriors came all the way back to cut the deficit to just three with about four minutes remaining.
But down the stretch the Warriors went cold and the Chargers hit their free throws to preserve the win.
Haddey Zastrow finished with a game-high 17 points, Sara Jacobson had 14 with five rebounds, and Kerryn Lund added 11 off the bench as the Chargers improve to 8-1.
Maycee Tolifson led the Warriors with 14 points, five rebounds, four assists, and three steals. Izzy Schmidt scored 13 with eight rebounds, and Haley Johnson added 10 points as the Warriors fall to 3-7.

Hancock 51, Battle Lake 39
HANCOCK – A night after suffering their first loss, Hancock turned in one of their better defensive performances with a 51-39 victory over Battle Lake.
The Owls held the Battlers 38 percent shooting and just 15 second half points.
Bennett Nienhaus had 16 points with four steals, Cole Reese had 10 points and Peyton Rohloff pulled won 13 rebounds as the Owls improve to 7-1.
Brennan Amundson led the Battlers with 15 points, but they fall to 2-5.

Minnewaska Quadrangular
GLENWOOD – A milestone night for the Minnewaska Area Lakers wrestling program at the Minnewaska Quad.
The Lakers swept through their competition and in the process three milestones were met, including junior Mason Blair recording win number 125, junior Tyler Van Luik getting his 125th career pin, and Chip Rankin earning his 150th coaching victory.