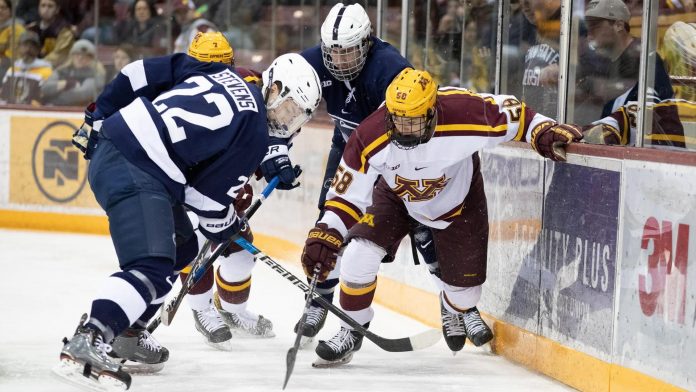 MEN’S HOCKEY
MINNEAPOLIS – The Gopher Hockey program picked up goals from senior forwards Brent Gates Jr. and Jack Ramsey, but it wasn’t enough as Minnesota opened 2019 with a 4-2 Big Ten loss to No. 9 Penn State on Friday night at 3M Arena at Mariucci.

Minnesota (6-8-4 overall, 3-3-3-0 Big Ten) outshot the Nittany Lions 32-31 in the contest and returned to form with a 3-for-3 performance on the penalty kill, but a string of three-unanswered goals by the visitors did in the home squad.

Gates put the Gophers up in the first period with his seventh goal of the year at 17:16 during a Minnesota power play – Minnesota went 1-for-5 on the advantage in the game. The senior captain set a new career best with goals in four-straight games and has now scored in five of the last six contests while Tyler Sheehy and Sampo Ranta picked up assists. Sheehy set a new career best with a point in nine-straight games.

Penn State evened things up 3:39 into the second period when Brandon Biro picked up his seventh of the year and took the lead at 8:09 when Kevin Kerr scored his first of the year. Denis Smirnov added to the lead at 1:23 of the third period with his fifth of the year.

Ramsey cut into the lead with his first goal of the year at 7:17 with assists from Ryan Norman and Jack Sadek. The assistant captain snapped a 17-game goal drought dating back to the season finale last year at Penn State while five of his 21 career points (two goals, three assists) have come against the Nittany Lions.

A late push by the Gophers was halted when Alex Limoges notched an empty-net goal at 19:42 of the third period.

Mat Robson moved to 4-4-4 on the year in goal for Minnesota, making 27 saves. Peyton Jones made 30 saves to earn the win, improving to 8-3-2 on the season for Penn State.

Minnesota and Penn State close out this weekend’s Big Ten series on Saturday at 7 pm.