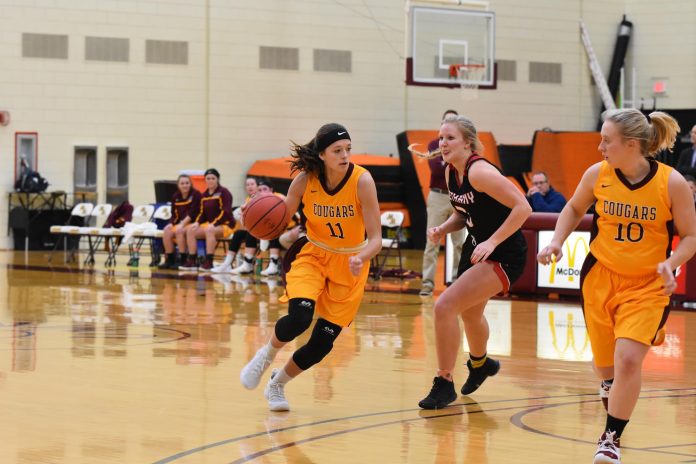 WOMEN’S BASKETBALL
MINNEAPOLIS, Minn. — Looking to continue the hot streak against conference opponents, the University of Minnesota Morris women’s basketball team was on the road at North Central University in UMAC action Saturday.

Just a game removed from joining the 1,000 career points club, senior Kendra Raths looked to continue to add to her career total.

Add to that total she did.

Scoring a game-high 23 points, Raths help guide the Cougars to a 65-48 win over the Rams in UMAC action Saturday in Minneapolis.

Minnesota Morris started the contest hot, exploding to a 12-4 lead just midway through the first quarter, much in large part to smothering defense and the ability to battle on the boards. In fact, after a Rams turnover, Grace Olson was able to race the floor for the lay up to give the Cougars a 11-4 lead. That was when the Rams appeared to wake up, Despite Minnesota Morris’ ability to extend the lead to 14-7 with just over four minutes left, North Central was able to mount a 12-3 rally to end the first quarter.

Raths would tie the game up at 19-19 with a lay up just 54 seconds in the second quarter only to give the Cougars their second lead of the game on a successful jumper just seconds later. Both teams would trade scores before Lexie Winter connected on a jumper from three-point territory that seemed to give Minnesota Morris the boost it needed. Fresh off a 19-point performance Abby Van Kempen would assert herself in the quarter, scoring the lay up with just over two minutes remaining to give the Cougars a 30-24 lead. The Rams would add just on basket in the final two minutes prior to halftime.

The Cougars started the second half with Elli Stevenson and Raths contributing in a big way. Of the first 12 points in the quarter, 10 came from Raths (6 points) and Stevenson (4). Stevenson continues to have a strong showing for the Cougars, reaching double figures after scoring 11 points on 29 minutes of action. As for Raths, she simply couldn’t miss. In 29 minutes of action, she went 11-for-15 from the floor (0-for-1 3pt), while also grabbing three rebounds and making a block. The Cougars also had a strong showing from the bench lead by Winter. The first year guard from Sartell, Minn.’s five points were the final points of the quarter for Minnesota Morris as the game reached the final quarter of play. It was a good performance for Winter, scoring 10 points off the bench in 18 minutes of action.

For much of the fourth quarter, the Cougars were in full control. In fact, the smallest lead was 14 points. The Cougars held the advantage in points off turnover, scoring 14 of their 65 points and fast break points, where the Cougars scored 15 of their 65 points. However, Minnesota Morris dominated when scoring from the paint, outscoring the Rams 36 to 16. In fact, the six points in the second quarter were the least amount of points scored per quarter in the contest.

It was certainly a battle, but the Cougars were able to close it out.

Shooting 14-of-28 from three point range, to include connecting on a four straight in the second half to build a 13-point lead, Minnesota Morris topped the century mark, scoring 100 points in the 100-85 win over the Rams Saturday in Minneapolis.

The Cougars started the contest with a 5-2 run that expanded to a 12-6 lead just minutes into the contest. However, the Rams were not to bow out early. By the 14:36-mark of the first half, the Cougars saw not only a six-point lead fade, but saw themselves trailing 17-15. That Rams lead would only grow due to smothering defense and hot shooting. Minnesota Morris managed to stay within striking distance for much of the opening part of the half.

Then members of the bench for the Cougars started to shake things up.

Trailing 25-18, Kenneth Riley nailed a three-point attempt to cut the lead to 25-21 just moments before Noah Grove would score five straight points to make it a one-point game, 27-26 with just over 9 minutes remaining in the half. the Senior from Morris, Minn. was the spark plug for the Cougars in the first half, consistently hitting the clutch shot to pull the Cougars back within a single possession. Just minutes later, Grove would hit another three-point attempt to again bring the game back within one possession. However, the offense for the Rams seemed to just be too much as they would again start widen the gap. Grove had a strong showing, scoring a team-high 21 points. In fact, the Rams would finish the first half shooting 25-for-35 from the floor, to include going 8-for-11 from three point range. Despite Grove and Trey Heinsuis’ best efforts to keep the game within reach – each player scoring 11 points in the half – North Central finished the half with a 23-10 run.

It was a similar story in the second half for the Cougars. They would remain strongly in the thick of the contest, but just were not able to regain the lead.

That is until Trent Jerome entered the contest.

After connecting on a free throw, the sophomore guard drove the lane to connect on the floater and would go to the charity stripe to try for a three-point play and cut the lead to 69-63. The Cougars defense started to sink in and slowly dwindle the Rams’ lead. Then, With the game at the single possession, Jeremy Halverson connects on a shot from long range to give the Cougars the lead at the 8:11-mark of the second half. It would be the Cougars’ second lead of the game.

It would also be the final time they would have to fight back into the game.

Four straight three pointer attempts from Halverson, Grove, Nick Peterson and Jeffrey Halverson would give Minnesota Morris the commanding 84-71 lead with just 6:19 left in the contest. For the remaining six minutes of action, the Cougars smallest lead was seven points. After only a pair of Cougars reached double figures in the first half, four Cougars would finish the contest in double figures. Heinsuis finished with 19 points after scoring 11 in the first half while Peterson finished with 10 off the bench. Jeffrey Halverson added nine points, but grabbed 10 rebounds while his brother Jeremy scored 20 points after going 4-of-6 from three point range.