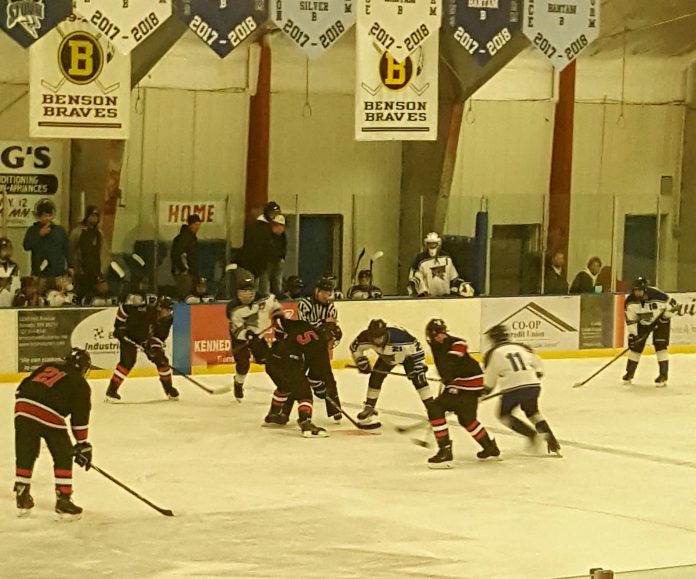 Morris/Benson Area 5, Worthington 3
BENSON – Morris/Benson Area scored four times in the third period to defeat Worthington 5-3 on Saturday at the Benson Civic Center.
Worthington took a 2-1 lead into the third period when Brady Loge redirected Hunter Blume’s shot for the equalizer at 3:33, but the Trojans answered a minute later when Colby Nickel tallied his second of the game for a 3-2 lead.
The Storm responded with three unanswered goals when Will Breuer tied it at 7:27, before going top-shelf on a one-on-two rush where he split the defenseman and flipped the puck just under the crossbar for a 4-3 lead.
Jack Riley added some insurance at 15:07 and the the Storm snapped a three-game skid. Chase Engebretson had 16 saves in net and the Storm improved to 4-6.
Preston Thavixay had 27 saves for the Trojans who are 1-11.

Worthington 6, Morris/Benson Area 2
BENSON – Ashton Fogelman tallied a hat trick to lead Worthington past Morris/Benson Area 6-2 on Saturday.
Taryn Picht’s goal at 2:49 of second tied the game at two, but the Trojans went on to score four straight before Karlie Bruns scored at 14:21 of the third.
Leah Thompson stopped 18 shots in net as the Storm fall to 3-13. The Trojans are 3-7.

West Central Area 70, Long Prairie/Grey Eagle 49
LONG PRAIRIE – Jack Van Kempen filled the stat sheet with 24 points, 14 rebounds, five steals, four blocks, and three assists to lead West Central Area to a 70-49 rout of Long Prairie/Grey Eagle on Saturday.
The Knights out-rebounded the Thunder 45-19, including 25 offensive rebounds for a dominating performance in the post.
Gage Staples had 12 points and six rebounds, Tate Christenson had 11 points, and Gavin Paulson added 10 for the Knights who are 7-3.
Gabe Abraham led the Thunder with 16 points, Blake Fossland added 14 as they fall to 3-3.