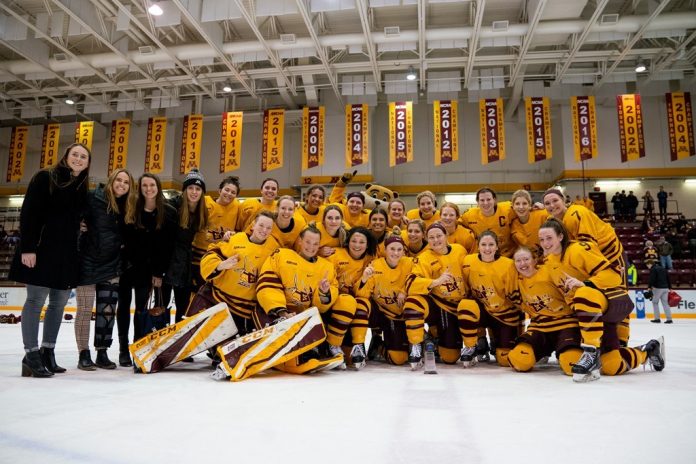 WOMEN’S HOCKEY
MINNEAPOLIS — The No. 2 University of Minnesota women’s hockey team used two goals each from Grace Zumwinkle and Taylor Heise along with 22 saves from Sydney Scobee to secure a 5-1 victory over St. Cloud State in the championship game of the inaugural Minnesota Cup on Sunday evening at Ridder Arena.

Minnesota (19-2-1, 9-2-1-0 WCHA) defeated Minnesota Duluth by a score of 4-3 in overtime to advance to the championship game while St. Cloud State (7-16-2, 2-12-0-0 WCHA) knocked off Minnesota State in a 1-0 shootout win after their semifinal game ended in a 2-2 overtime tie on Saturday. The Bulldogs won the third-place game with a comeback win over the Mavericks, scoring four third-period goals for a 5-3 win after the Mavericks took a 3-1 lead into the third period.

On the way to winning the inaugural Minnesota Cup, the Gophers took an early 2-0 lead over the Huskies and never looked back. Minnesota got on the board first when Emily Brown fired a shot from the point through traffic, and Nicole Schammel got a piece of it before Taylor Wente redirected it past SCSU’s Janine Alder to put the Gophers up 1-0 at the 4:16 mark of the opening period. Taylor Heise then doubled the lead just 1:35 later when she scored on a rush with Emily Oden. Crystalyn Henger picked up the second assist on the play, and the Maroon & Gold took a 2-0 lead into the first intermission.

The Gophers outshot the Huskies, 50-23, for the game while going one-for-three on the power play. Meanwhile, the Maroon & Gold was perfect on the penalty kill at three-for-three. SCSU’s Alder finished with 45 saves while Scobee picked up her fifth win of the season (5-2-1) and Minnesota extended its winning streak to 12 games.

Up next, Minnesota returns to WCHA action with a trip to Mankato, for a conference series with the Mavericks. The Gophers and Minnesota State face off at 7:00 pm. Friday, Jan. 11 and 3:00 pm. Saturday, Jan. 12.

WOMEN’S BASKETBALL
MINNEAPOLIS (AP) — Brandi Beasley scored 18 points and Illinois closed the game with an 11-2 run to rally for a 66-62 upset over No. 12 Minnesota on Sunday.

In the fourth quarter, Illinois made all four of its 3-pointers and 9 of 17 overall for 23 points while Minnesota was 4 of 17 and had nine points.

Alex Wittinger nailed a 3 and Beasley had a free throw before Wittinger’s layup put Illinois ahead 61-60 with 2:22 to play. Kenisha Bell answered with a jumper for the Golden Gophers at 2:06 but Beasley made it 63-62 at 1:41.

Minnesota missed two free throws and had a shot blocked by Wittinger before Arieal Scott’s clutch 3 as the shot clock wound down with 19 seconds to go. The teams traded turnovers before Minnesota missed a 3 and 2 in the closing seconds.

The Golden Gophers (12-2, 1-2), who lost their second straight, made one of their last seven shots while Illinois was 5 of 7.

Ammalese Lamke had 18 points and Jasmine Brunson 17 for Minnesota. Bell had 14 points and 11 rebounds.