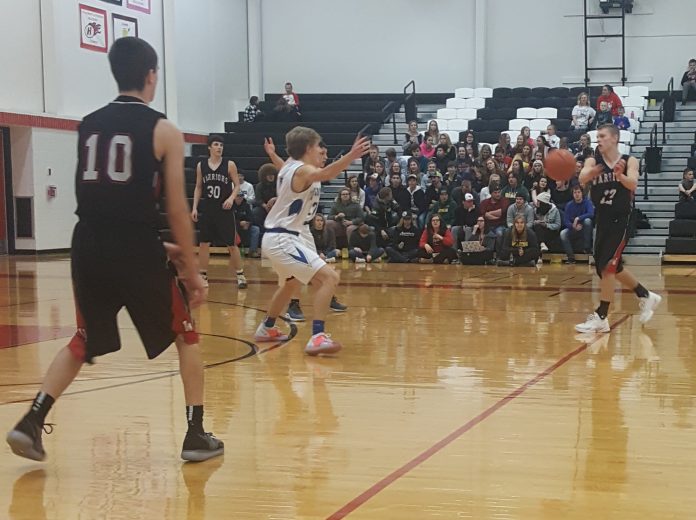 Melrose 61, Morris Area/Chokio-Alberta 58
MELROSE – Melrose was able to hang on late and edge Morris Area/Chokio-Alberta 61-58 in Melrose on Tuesday.
Jackson Loge led the Tigers with 17 points and seven rebounds, Camden Arndt was 5-10 from the floor to finish with 15 points and four assists, but the Tigers dropped their third straight, falling to 3-6 overall, 2-4 in the West Central Conference.
The Dutchmen are 7-3 and 4-1 in conference.

Wheaton/Herman-Norcross 63, Clinton-Graceville-Beardsley 56
WHEATON – Wheaton/Herman-Norcross erased a nine-point second half deficit and pulled away late for a 63-56 victory over Clinton-Graceville-Beardsley on Tuesday.
Matt Thielen sparked the Warriors with some key steals and finished with a game-high 26 points, Hunter Johnson added 16 points and they improved to 3-5 on the season, 1-3 in Pheasant Conference play.
Sam Adelman led the Wolverines with 25 points and 18 rebounds, Chanler Comebellick came off the bench for 10 points with 11 rebounds, and Caleb Cardwell scored 14.
The Wolverines out-rebounded the Warriors 50-19 but a second half cold stretch and turnovers kept them from getting the win, falling to 1-8 overall, 0-5 in conference.

Hancock 58, Brandon-Evansville 54
EVANSVILLE – Bennett Nienhaus scored 27 points with six rebounds, five assists, and three steals to lead Hancock past Brandon-Evansville 58-54.
The Owls shot just 32 percent from the floor but overcame that by getting 11 steals and holding the Chargers to 5-21 shooting on threes.
Daniel Milander had 10 points with five steals and four assists for the Owls who are 8-1 overall and 3-0 in the Pheasant Conference.
Titus Fuller had 15 points for the Chargers, Sam Fuller scored 14, and Eli Anderson added 11 as they fall to 5-5, 2-2 in conference.

Minnewaska 67, Benson 50
BENSON – Minnewaska shot 60 percent from the field in a 67-50 win over Benson.
Grant Jensen led the Lakers with 19 points, five rebounds, and three assists, Shawn Carsten added 14 points, Ryan Amundson had 10.
The Lakers are 7-2 overall, 4-1 in the West Central Conference. Will Endreson had 23 points for the Braves who fall to 2-7, 1-4 in conference.

West Central Area 56, Hillcrest 41
BARRETT – West Central Area dominated the second half to earn a 56-41 win over Hillcrest. Trailing by one at halftime, the Knights opened the second half on a 14-4 run and continued to pull away, holding the Comets to just 31 percent shooting.
Jack Van Kempen had 14 points with eight rebounds, Jacob Bright had 13 points with four assists, Grant Beuckens added 12 points, six rebounds, and six assists, while Teigen Moritz pulled down 11 rebounds.
The Knights are 8-3 overall, 3-1 in the Pheasant Conference. The Comets got 14 points from Sander Frustol but fall to 3-3.

Brandon-Evansville 50, Ashby 30
ASHBY – Brandon-Evansville continued their defensive dominance with a 50-30 victory over Ashby on Tuesday.
Nobody scored in double-figures for the Arrows who fell behind big early, but battled to hang around until the Chargers pulled away in the second half. Haddey Zastrow and Mikenna Pattrin each had 10 points for the Chargers, Madison Quinn added nine as they move to 9-1 overall, 5-0 in the Pheasant Conference, 4-0 in the Little Eight.
Ashby got nine points from Celi Nelson, falling to 3-7.

Hancock 36, Benson 33
HANCOCK – Hancock held Benson to just 29 percent shooting, including 0-10 from long range and earned a 36-33 victory over the Braves.
Lexi Staples led the Owls with 10 points, Rylee Hanson and Taylor Wilson each added 10, Haley Mattson had 10 rebounds and Hancock is 5-3. Claire Ricard had 13 points for Benson who fell to 4-7.

West Central Area 68, Hillcrest 24
BARRETT – West Central Area used an early 15-0 run to set the tone, on their way to a 60-24 rout of Hillcrest.
The Knights led 42-11 at halftime and continued to pour it on in the second half, getting 17 points, 10 rebounds, and four blocks from Ella Van Kempen. Lexi Bright added 12 points, eight rebounds, and four assists and the Knights are now 8-4, 4-0 in the Pheasant Conference. The Comets fell to 1-7.

Milbank 129.35, Morris Area/Chokio-Alberta 118.35
MORRIS – Two new personal best scores and season high event totals were set for Morris Area/Chokio-Alberta in a 129-118 loss to Milbank in gymnastics on Tuesday from Morris.
Callie Snell performed a stuck beam routine, while Taylor Kill took fifth on each the floor and all-around.
Olivia Lebrijia placed second on vault, third on floor and all-around, fourth on beam, and fifth on bars.