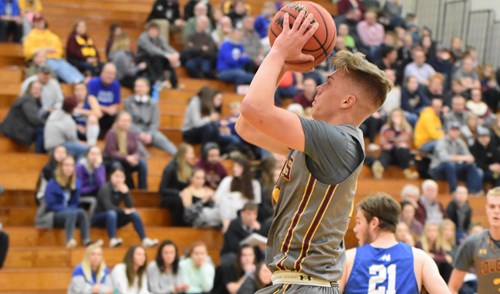 MEN’S BASKETBALL
MORRIS, Minn. — After a 100-85 win over the Rams of North Central University, the University of Minnesota Morris men’s basketball team proved they will always be in the thick of the contest until the final buzzer.

While it was certainly a battle early on, luckily the Cougars didn’t have to wait for the final buzzer to realize the outcome.

Exchanging leads back and forth for much of the first half, Minnesota Morris was able to pull away in the second half for a 77-67 win over Martin Luther College inside the UMM P.E. Center Wednesday night. It was the second win in a row for the Cougars and extended the Knights losing streak to three.

The Cougars were able to regain the lead at the 6:48-mark of the contest after Noah Grove’s lay up gave them a 20-18 lead. That appeared to be the spark Minnesota Morris needed as they were able to slowly pull away from the Knights. It also appeared to be the spark that Grove needed as well. Just minutes after giving the Cougars the lead, the senior guard nailed a three-point attempt from the corner to make it the largest lead of the half at nine points, 34-25. Grove would finishing the scoring out in the first half with another lay up to give the Cougars a 36-25 lead at the half. It was a phenomenal showing from Grove, showing a game-high 14 points in the first half in just 15 minutes of action. He finished the contest with a game-high 24 points.

In the second half, the rest of the Cougars appeared to wake up. After scoring just four points in the first half, Jeffrey Halverson exploded in the second half for 15 points, but did much of his damage on the boards. In 31 minutes of action, the senior forward grabbed a game-high eight rebounds with seven of them coming on the defensive end of the floor. In fact, his presence down low was a key reason why the Cougars were able to score 22 points in the paint. While the Cougars were only able to score 10 second chance points, Trey Heinsuis was a a key reason they scored anything. While he also exploded for a game total of 11 points, he grabbed a game-high six offensive rebounds. His three point attempt at the 10:46-mark of the second half extended the Cougars’ lead to 58-43.

In fact, Heinsuis’ three point attempt also gave the Cougars the largest lead of the first half at 15. For much of the final ten minutes, the Cougars held a 10 point or more. The Cougars also received support from the bench as three players (Nick Peterson, Trent Jerome, Kenneth Riley) combined for 15 points off the bench. Playing 18 minutes, Jerome was another spark for the Cougars, scoring nine points while also tallying an assist. The lone stat line that the Cougars did not hold an advantage in was in points off turnovers, scoring 11 points while the Knights were able to connect for 17.

WOMEN’S BASKETBALL
MORRIS, Minn. — Aiming to make it three straight wins and fourth straight in UMAC play, the University of Minnesota Morris women’s basketball team was going to have to down a Martin Luther College squad itching for its first win in five games.

The Knights were certainly not ready for the play down below from the Cougars.

Combining for 35 points, Abby Van Kempen and Kendra Raths powered Minnesota Morris to a 89-39 win over the Knights Wednesday night inside the UMM P.E. Center to make it four straight conference wins.

The Cougars exploded to a 14-3 run in the first quarter thanks in large part to the smothering defense on display. In the first quarter alone, the Minnesota Morris forced six turnovers that directly were capitalized into points for the Cougars. In the first half alone, the Knights turned the ball over 12 times and struggled shooting from the field, going 8-for-23 from the floor, to include 0-for-1 on their only attempt from long range.

As for the Cougars, it wasn’t about the Knights stopping them, but more so their play stopping them. Despite having six turnovers in the first half, the Cougars shot 61.3 percent from the floor, connecting on 19 of their 31 attempts. The duo of Raths and Elli Stevenson continued to state their case as the best 1-2 punch in the conference. Going 6-of-9 from the floor and 1-of-2 from three point territory, Stevenson led all scorers with 14 points in 11 minutes of action. Raths was equally impressive, going 4-of-6 from the floor for 10 points in 15 minutes of action. However, it wasn’t just them who contributed right away. Six different Cougars registered points in the first half, with Van Kempen closely behind with eight.

Just as the Knights offense appeared to slowly catch a groove, the Cougars offense only extended the margin. With just over three minutes left in the half, Stevenson’s three point attempt gave the Cougars a commanding 34-13 lead. It continues to be a good stretch for the senior guard, scoring 18 points, one block, two steals and five rebounds. She was just three assists shy of recording a double-double, finishing with seven.

The lead would only grow for the Cougars in the second half.

After Raths’ basket extended the lead to 33 points, the junior forward in Van Kempen immediately followed with a basket of her own to help keep the possibility of a comeback out of reach. Raths had another stellar showing, scoring a game-high 19 points and grabbing six rebounds. Although, her presence on the defensive end of the floor was intimidating for any player attempting to score, registering a game-high three blocks and four steals.

Like Raths, Van Kempen’s performance down low is a promising sign for the Cougars and a scary sign for opposing teams. Grabbing a game-high 11 rebounds, the junior forward recorded yet another double-double as she also finished the game with 13 points. In fact, the rebounding and second chance points is what help propel the Cougars to such a win. While both teams had a similar stat line on the boards, the Cougars were able to turn 10 offensive rebounds into 15 second chance points.

The Cougars also held advantages in points off turnovers (29-to-11), bench points (29-to-11) and held a strong grip on the ability to grab points in the paint, scoring 46 of thier 89 points down low.

Lexus Eagle Chasing had a strong showing in the second half, scoring seven points for a game total of 10.

The Cougars (8-6, 5-1 UMAC) will travel to Northland College Saturday. Tip-off is set for 3 P.M. inside Kendrigan Center.