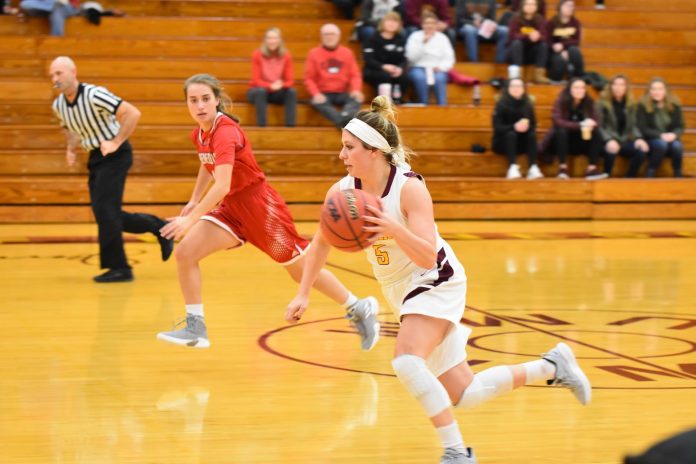 MEN’S BASKETBALL
ASHLAND, Wis. — Looking to make it three straight wins within the Upper Midwest Athletic Conference (UMAC), the University of Minnesota Morris men’s basketball team traveled to Northland College in hopes of not just winning the conference’s “Game of the Week” but extend the streak in the process.

It was a battle late, but the Cougars were unable to close it out, falling 84-73 Saturday in front of 102 fans.

The dagger for the Cougars was provided early by way of a 20-4 run by the Jacks to start the contest. In fact, Nick Peterson’s free throw at the 14:56-mark of the contest was the first point of the game for the Cougars, trailing 17-1. It would take another five minutes for the Cougars to reach double figures after Trey Heinsuis connected on a three-point attempt with 9:30 left int the first half. Much of the issue was the Cougars simply being ice cold from the floor, shooting 36 percent from the floor (8-of-22) in the first half and were forced into committing 11 turnovers.The Cougars entered the half trailing 29-36 after mounting a quick run to bring the lead to seven after a jumper from Trent Jerome.

It was a tale of two halves for the Cougars.

After having to climb their way out of a large double-digit deficit for much of the first half, the Cougars started the second half hot. Noah Grove managed to cut the lead to four (42-38) after a pair of successful free throw attempts. Grove followed up with a three pointer just a minute later to cut the lead to a single possession. It has been a great start for Grove in 2019, scoring a team-high 18 points after going 5-of-11 from the floor. In fact, the Cougars hit back-to-back three after Peterson nailed a long jumper to give the game its first tie of the contest.

Aside from Grove, another key performer in the second half was Jeffrey Halverson. After scoring just five points in the first half, the senior forward exploded for 17 points after going 7-of-12 from the floor, to include going 3-of-4 from the free throw line. In fact, a lay up by Halverson would provide the Cougars with the ability to be within a possession of taking the lead.

Much of the second half was within a five-point grasp, however the Cougars were unable to come within striking distance. Aside from the 20-4 run to start the contest, the Cougars struggled in transition, giving up 30 points off turnovers. The Cougars also struggled down low, surrendering 34 points in the paint while managing to score just 22.

The Cougars (6-9, 4-3 UMAC) will be back in action Wednesday, playing host to the University of Northwestern. Tip-off is set for 7:15 P.M.

WOMEN’S BASKETBALL
ASHLAND, Wis. — The University of Minnesota Morris women’s basketball team traveled across the border to face Northland College in hopes of crossing back over the Minnesota line with a five-game win streak within the UMAC.

Junior Abby Van Kempen’s performance was nothing short of spectacular.

In 31 minutes of action, the junior from Elbow Lake, Minn. scored a game-high 21 points as the Cougars overpowered the Jills 90-54 in Upper Midwest Athletic Conference play Saturday in front of 87 fans.

The Cougars jumped out to a 13-3 lead midway through the first quarter much in large part to the play from the stellar junior. Becca Holland’s three pointer at the 1:08-mark of the contest provided Minnesota Morris with a commanding 23-7 lead to end the first quarter. Holland provided the Cougars with nine points after going 2-of-7 from the field and 1-of-2 from three point range. The Cougars’ ability to score points off the fast break continued into the second quarter as Grace Olson’s lay up on the fast break would give the Cougars a 33-11 lead. The Minnesota Morris defense provided quite the spark, forcing 30 total turnovers. The key to those turnovers is that the Cougars were able capitalize on the offensive end, scoring 40 points off turnovers while Northland managed just 11. In fact, Minnesota Morris was able to create 14 turnovers off of steals with Van Kempen, Elli Stevenson and Lexus Eagle Chasing each generating three. It was a solid showing from Eagle Chasing, going 3-for-4 from the floor.

While the Cougars were able to generate points in transition, the ability to score in the paint proved to be the biggest factor as Minnesota Morris was able to scored 60 points in the paint. While 21 came from Van Kempen, senior Kendra Raths continued her hot streak as of late, scoring 13 points after going 6-of-10 from the floor. As the Cougars held a 24-point lead for much of the second half, Elli Stevenson also continued her scoring streak of late. In 26 minutes of action, the senior guard scored 15 points, going 5-of-7 from the floor and 5-of-6 from the line.

A factor that also helped provided the Cougars with the ability to strengthen its grip on the large lead was the ability to capitalize from the free throw line as Minnesota Morris shot 62.5 percent from the charity stripe in the contest.

The Cougars (9-6, 6-1 UMAC) will be back in action Wednesday, playing host to the University of Northwestern. Tip-off is set for 5 P.M.