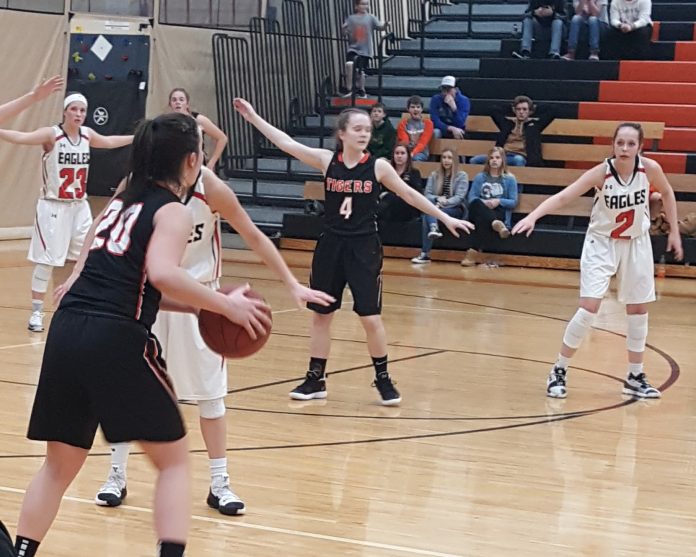 Morris Area/Chokio-Alberta 55, Lac qui Parle Valley 51
MORRIS – Morris Area/Chokio-Alberta handed 9th-ranked Lac qui Parle Valley their first loss of the season with a 55-51 victory on Saturday from the Tiger Center.
Riley Decker was 5-8 on threes, to finish with a game-high 19 points, Maddie Carrington added 11, and Malory Anderson dominated the glass with 18 rebounds and nine points.
The Tigers were able to overcome 22 turnovers with a big rebounding advantage 37-25 and an answer for each Eagles bucket with one of their own.
The Tigers have won three straight and are 7-5 while the Eagles fall to 11-1.

Morris Area/Chokio-Alberta 72, Lac qui Parle Valley 68
MORRIS – Morris Area/Chokio-Alberta overcame a 12-point second half deficit and earned a 72-68 win over Lac qui Parle Valley.
While the Eagles rained threes, the Tigers Jackson Loge dominated in the post with 27 points, 16 rebounds, and five blocks.
Austin Bonn hit six of the Eagles 10 first half threes and had 21 points by halftime, but the Tigers Jaden Maanum shut him down in the second half, holding Bonn to just five more points, and 27 for the game.
Zach Hughes provided the Tigers outside shooting with four threes and 14 points, Jaret Johnson had 13 points with eight assists, and Camden Arndt battled through foul trouble to finish with 10 points.
Caden Bjornjeld had 21 points and Lac qui Parle Valley dropped to 9-4, while the Tigers improved to 5-6.

Osakis 55, Minnewaska 48
MINNEAPOLIS – Minnewaska shot just 37 percent in a 55-48 loss to Osakis from Target Center in Minneapolis on Saturday.
Jack Blevins had 16 points for the Lakers, Grant Jensen added nine but they managed just 22 rebounds and fall to 7-4. Daniel Savegeau had 25 for the Silverstreaks who are 11-0.

There were three division at the invite (White, Orange, Black), and the Tigers score of 125.8 is a new season high.