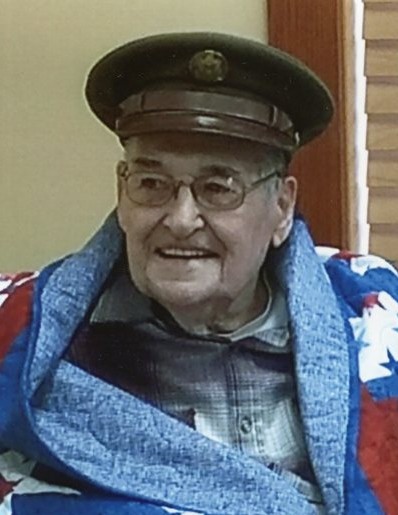 Mass of Christian Burial will be held at 11:00 a.m. on Thursday, January 17th at Sacred Heart Catholic Church in Glenwood with Father Joe Vandeberg officiating.

Visitation for Leo will be on Wednesday from 5:00-7:00 p.m. with parish prayers at 7 p.m. at the Hoplin-Hitchcock Funeral Home in Glenwood. Visitation will also continue one hour prior to the service at the church on Thursday.

Leo was born on July 27, 1918, in Epiphany SD to Frank and Catherine (Schmidt) Zens.  He was baptized at an early age in Epiphany and later confirmed there. He attended school at St. Mary’s Parochial school in Epiphany where he grew up with his five sisters and three brothers. After 8 years of schooling the family moved to Minnesota where he began his working career.  He handpicked corn in several states as a farm hand and worked as a logger in Baudette and then in Coeur d’Alene, Idaho before entering the Army and serving in World War II from 1941-1945. Part of his time in the Army was in the South Pacific.

He was united in marriage to Edna Cohrs on July 2, 1945 in Currie, Minnesota. To this union 4 children were born: Alice, Allen, Dean and Anne. The family lived and farmed in the southern part of Minnesota before moving to Long Beach in 1965 where they owned and operated the Long Beach Superette until their retirement in 1975. During those years he also served as a Justice of the Peace. After selling the store, Leo and Edna made their home in Minnewaska Township. Edna passed away on May 12, 2009.  Leo continued living there until February of 2014 when he moved into the Ridgewood Villa.

Leo was the neighborhood handy man, enjoyed wood working projects, making things like his Jesus signs and many other game puzzles for his family and friends to solve. He always enjoyed visits from his many nieces and nephews. He was a member of Sacred Heart Catholic Church where he was an usher and helped with many projects in the church and the cemetery.  He was an Honorary Life member of the Knights of Columbus, the American Legion and the VFW.

Memorial donations may be directed to your local hospice or St. Jude’s Children’s Hospital.

Arrangements are with the Hoplin-Hitchcock Funeral Home in Glenwood.