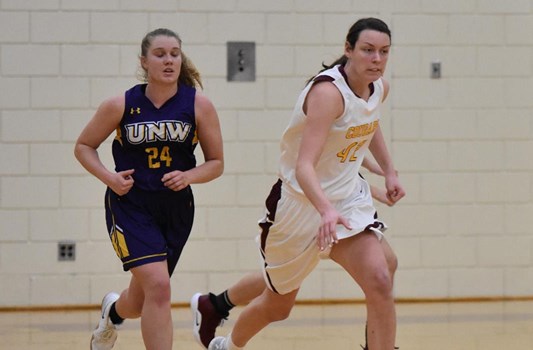 MEN’S BASKETBALL
MORRIS — The University of Minnesota Morris men’s basketball team looked to get back to its winning ways with a UMAC contest against the University of Northwestern.

The Cougars knew it was going to be a battle if they looked to upend one of the top teams in the conference.

Through one half of play, they were certainly in the thick of it.

However, the Eagles’ offensive proved too much for the Cougars as Northwestern managed to pull away late for a 94-73 win Wednesday night on Jim Gremmels Court.

The Cougars started the contest matching the Eagles strike-for-strike until James Pendleton’s three pointer at the 14:44-mark of the first half gave the Minnesota Morris the first lead of the game. The lead would extend to 20-15 after Trent Jerome found Nick Peterson under the basket. While the Cougars managed to keep the game within two possessions, Pendleton’s four-point play could have been a sign that everything in the first half started to roll in favor of the Cougars. After receiving a pass from Kenneth Riley, Pendleton fought through the foul to sink a long jumper in the corner near the Eagles’ bench. He would also connect on the attempt from the free throw line to give Minnesota Morris the 27-17 lead. Pendleton had his best performance of the season, scoring a game-high 22 points after going 4-of-7 from three-point range and dished six assists.

However, the Eagles slowly started to mount a comeback, ripping off a 9-2 run to tie the game at 42-42 with just over three minutes left in the first half. Pendleton’s free throw connection would make it a 44-43 contest at the half.

The second half started fairly similar as the first for the Cougars, managing to jump out to a 52-48 lead just three minutes into the action. In fact, Minnesota Morris managed to build a 61-56 lead at the 13:47-mark of the final half after Pendleton’s three pointer. Then the Eagles started to wake up, erasing a five-point lead and swinging it into a 16-3 run to build a 72-66 lead. The Eagles stayed hot and turned a 16-3 run into a massive 35-3 run. In fact, prior to Jeffrey Halverson’s jumper at the 1:34-mark of the half, the Cougars last successful attempt came at the 9:54-mark of the second half. The biggest key to success for the Eagles and what really started the struggles for the Cougars was the ability to win on the boards.

Northwestern out-rebounded the Cougars 55-30, but held a commanding 20-4 advantage on the offensive glass. Those offensive rebounds turned into 22 second chance points for the Cougars. Another factor that gave Minnesota Morris fits was the inability to connect after generating a turnover, scoring one-point off a turnover while Northwestern managed to scored 16 points.

The University of Northwestern has also been enjoying a successful start to 2019, boasting just one loss to UMAC power UW-Superior.

Needless to say that Wednesday night’s UMAC contest between the two schools could potentially hold implications for the Cougars’ run at the conference title.

It’s also needless to say that the Cougars were not looking forward to seeing that win streak end early.

Seeing a nail biter for much of the first half, the Cougars were able to pull away in the second to a 68-52 win over the Eagles to extend their UMAC winning streak to six and move to 7-1 in conference play.

The Cougars started the contest with a three from senior Kendra Raths to take the early lead until the Eagles would connect on long range for the game’s only tie just two minutes into the contest. Minnesota Morris was able to fire their way to a 14-9 lead late in the first quarter thanks to some solid sharpshooting on the perimeter. The accuracy from long range proved to be a key factor for the Cougars tonight, connecting on 11 of their 23 attempts in the game (47.8 percent).

Holding a three-point lead into the second quarter, Raths started to become the unstoppable force that has helped carried the Cougars throughout the last six wins, leading all scorers with 10 points in the first half. Her back-to-back layups midway through the second quarter gave the Cougars a 23-19 lead with just over four minutes left. In 28 minutes of action, the senior forward from Sartell, Minn. scored 16 points while also registering three steals and five total rebounds. Minnesota Morris would take a nine-point lead into the locker room at half thanks to a three pointer at the end of the first half by Lexie Winter.

A sight that has been familiar to Cougars fans has been the second half performances from Abby Van Kempen.

After scoring just five points in the first half, the junior forward exploded for a game-high 18 points and six rebounds. Her three-pointer from the corner provided the Cougars with an 11-point lead just three minutes into the second half. While her presence was greatly felt as a scorer, but made the junior dangerous in the second half was her ability to give the Cougars second half scoring opportunities. Grabbing a game-high four offensive rebounds, the Cougars were able to score seven points off initial shot attempts.

The Cougars (10-6, UMAC 7-1) will take lay their six-game conference winning streak on the line Saturday as they travel to Wisconsin in a rematch against UW-Superior in the UMAC “Game of the Week.” The Yellow jackets topped the Cougars on Jim Gremmels court 59-52 on Dec. 8. Tip-off is set for 3 P.M.