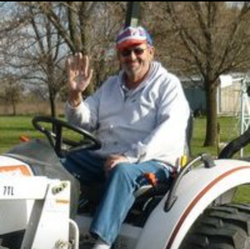 Funeral Services for Riley Williamson will be held Friday, January 18, 2019, at 11.00 a.m. at Doran Presbyterian Church in Doran, Minnesota, with Pastor Kelly Hart officiating. Organist will be Sarah Tolbert.

Visitation will be held Thursday, January 17th from 5:00 p.m. until 7:00 p.m. with a 7:00 p.m. Prayer Service and Time of Sharing at the Bainbridge Funeral Home in Wheaton. Visitation will continue Friday morning one hour prior to service time at the church in Doran.

Riley was born in Rector, Arkansas to George and Loretta Williamson. He was delivered by his Grandmother Mosley at her home.  At a very early age he moved to Washington State where he attended school. He began working to support himself as a young man.

Riley married Sandra Nall in Harviell, Missouri. From this marriage were born two children, Loretta Pauline and George Riley.  Riley settled in Bloomington, Minnesota where he began a long career in the plastics industry. He started as a line man and worked his way up to foreman at Strout Plastics in Bloomington.

Riley worked hard at Strout Plastics along with a side job as a handyman for Century 21 Real Estate. He retired from Strout Plastics in 1996 as the General Manager. He was very proud of the fact that he worked his way up the ladder with hard work and integrity.

Riley and Janet purchased a farm place west of Campbell, Minnesota, in the fall of 1994. They worked on remodeling this home for many, many months. In June of 1996, they retired early and moved north from Lakeville, Minnesota, where they had raised their family.  Upon moving to rural Campbell, they were asked to join the Doran Presbyterian Church.  Riley served as Clerk of Session for 15+ years. He was also the church handyman and problem solver. Riley built a beautiful display case that sits in the entryway today.

He had a great love for woodworking and collecting antique tools. He made toy boxes for the grandchildren, china cabinets and end tables. His last special project was a gate for the top of their stairway so Janet would not accidentally fall down the stairs. This project was very special as it was his last and he was very ill when he completed it.

In June of 2011, Riley and Janet moved to Wheaton, Minnesota. The farm home they worked so hard to remodel was lost to a horrific fire and they lost everything. Although they didn’t plan on moving, the 12th Street Coffee Club was born. They formed great friendships with their new neighbors.

In October when Riley was diagnosed with terminal cancer, the neighbors became family. They shoveled before the snow was done falling, just in case he needed to get out. They brought food when the refrigerator was full. They hugged and loved like no neighbors have ever done. (They also went through a lot of coffee)

Riley is survived by his wife of forty-seven years Janet; his daughters: Loretta (Ricky) Finck of Jamestown, ND and Dawn (Jeffray) Krump of Tintah, MN; and his son Darrel (Mary) Rosenkranz of Lonsdale, MN.