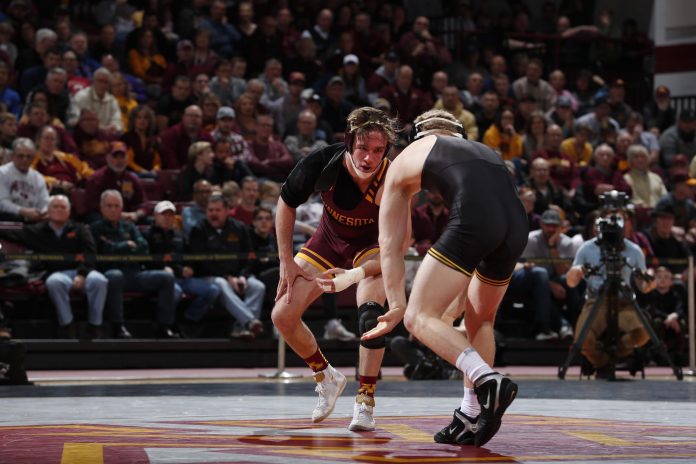 CHAMPAIGN, Ill. –The No 7 Minnesota Golden Gophers took down No.17 Illinois on the backs of six victories, including two pins and two major decisions.

The victory is the Gophers ninth of the season and their second in Big Ten competition. They bounce back from a 24-10 loss to No.4 Iowa.

157-pound Steve Bleise battled No.13 Eric Barrone for the third consecutive season and for the third time came out on top. Bleise secured the cradle and pinned Barrone in 6 minutes and 17 seconds.

After heavyweight Gable Steveson notched three first period takedowns he finished things off quickly with a pin on the edge of the mat for his fourth fall of the year.

149-pound Tommy Thorn secured a major decision after two straight losses. A takedown on the edge of the mat gave Thorn the early advantage and he stayed aggressive the rest of the match. His aggression gave him four takedowns and he drew three stall calls as a result.

165-pound Carson Brolsma secured his first ranked victory of the year with a narrow 3-2 victory over No.19 Joey Gunther. Both wrestlers secured escapes to start the final two periods, but Brolsma’s second period takedown proved to be the decisive score.

It was Brolsma’s first victory over a ranked wrestler this season after four losses.

174-pound Devin Skatzka got a pair of first period takedowns and proceeded to add another in the final two periods. It was his eighth major decision of the season and he now has 12 total bonus point victories.

133-pound Ethan Lizak bounced back from a ranked loss last weekend in emphatic fashion with a couple of two-point nearfalls in the first period to take an 8-1 lead. The redshirt senior finished off his 17th victory of the year with a 12-9 decision, including riding time.

At 141-pounds Mitch Mckee dropped only his second match of the season. After the first period ended scoreless, the junior fell behind late on two close takedowns to lose to No.4 Mike Carr.

Returning to the lineup for the first time since Dec.8, 184-pound Owen Webster dropped his bout with No.2 Emery Parker by decision 10-4.
197-pound Rylee Streifel fell by decision 7-3.

The Gophers forfeited the final 125-pound bout for precautionary reasons.