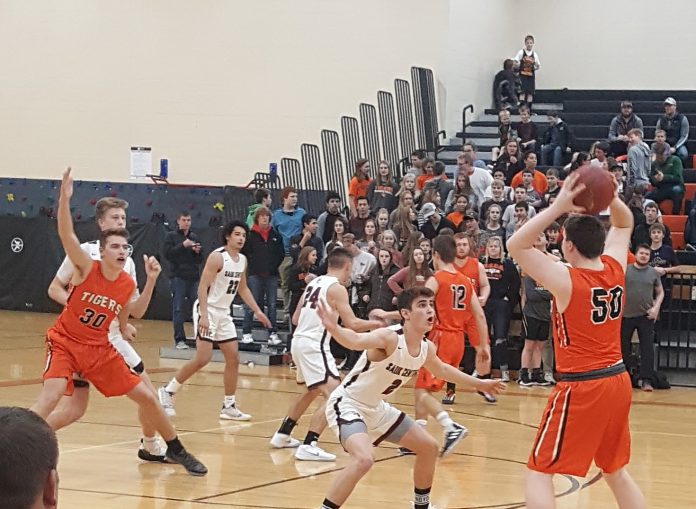 Morris Area/Chokio-Alberta 71, Hill-Murray 57
MAPLEWOOD – Jackson Loge and Jaret Johnson combined for 52 points and the Morris Area/Chokio-Alberta Tigers defeated Hill-Murray 71-52 on Saturday in Maplewood.
Loge finished with 27 points and 16 rebounds, while Johnson added 25 points with five boards and four assists, and the Tigers shot 49 percent as a team.
Zach Hughes chipped in 13 points for the Tigers who are 7-7, the Pioneers fall to 1-11.

Central MN Christian 50, Hancock 44
PRINSBURG – Collette Duinick scored 19 points to lead Central MN Christian past Hancock 50-44 in girls hoops on Saturday.
Katelyn Bulthuis had 15 for the Blue Jays who extended their one-point halftime lead in the second half and held off the Owls late.
Lexi Staples led the Owls with 14 points and four steals, Rylee Hanson had 10 points with eight rebounds, Morgan Kisgen added seven points, and Carlee Hanson filled the stat sheet with six points, six rebounds, and three assists. Hancock is 5-7 and the Blue Jays are 8-9.

Windom Area 5, Morris/Benson Area 2
WINDOM – Three unanswered goals pushed Windom past Morris/Benson Area 6-2 on Saturday in boys hockey.
Jack Riley tied the game at one off a feed from Kolby Goff at 13:23 of the first. The Eagles took a 2-1 lead before Will Breuer tied it with a power-play goal at 5:27 of the second.
The Eagles reclaim the lead before the intermission, then added two more in the third.
Eli Becker had a goal and four assists for the Eagles who got 19 saves from Josiah Quintero and improve to 6-5-1.
Brady Backman stopped 37 shots for the Storm who fall to 5-10.

Windom Area 8, Morris/Benson Area 2
WINDOM – Chloe Zimmel scored twice in the first 6:57 of the game, but not much else went right for Morris/Benson Area in an 8-2 loss to Windom.
Zimmel’s first goal came on a penalty shot to give the Storm a 1-0 lead. Her second was nearly four minutes later to again put the Storm ahead 2-1.
The Eagles responded by scoring seven unanswered to improve to 4-13.
Anna Volk scored five goals with two assists, Ellyson Bang added a goal and three assists, and Bethany Schmidt had 15 saves in net for Windom.
Kellie Wilts had an assist for the Storm, Leah Thompson made 19 saves, but the loss drops them to 3-16.

MNGWL Team State Tournament
HASTINGS – The MAHACA Tigers junior varsity wrestling team took fourth place at the state wrestling tournament in Hastings over the weekend, falling to Big Lak 40-24 in the third place match.
Shakopee defeated Bemidji 45-18 in the championship, ACGC took fifth with a 32-30 win over Foley, and Owatonna placed seventh with a 39-36 defeat of Farmington.