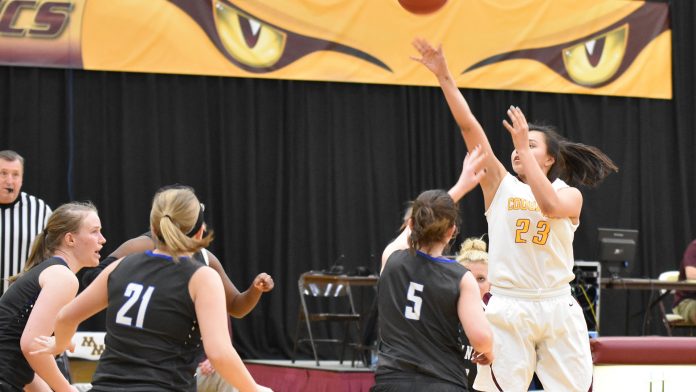 “What I really liked was how intentional we were in the second half,” head coach Tim Grove said. “We got the ball where we wanted it to go and just having a better intensity defensively. I really liked how we played the last 20 minutes of the game.”

Freshman Lexus Eagle Chasing paced the Cougar offense with 29 points, along with Kendra Raths and Abby Van Kempen each scoring 11 points apiece. As a team, the Cougars capitalized on 23 Lion turnovers by scoring 31 points on Lion turnovers.

The Cougars led from the start as they jumped out to a 9-0 lead over the first 2:09 of play. Over the opening 2:09, Eagle Chasing scored six points on a pair of 3-pointers. After the first period of action, Minnesota Morris held an 18-7 lead.

The second quarter saw Morris extend its lead to as much as 16 points on a layup from Eagle Chasing to make it 30-14 with 40 seconds left in the half.

Following halftime, the Cougars outscored the Lions 28-8 in the third quarter. Over the final 2:14 of the third stanza, Morris went on a 10-0 run to secure the 58-25 lead heading into the final period of play.

Eagle Chasing capped off her night by scoring 12 of the team’s 16 points in the fourth quarter. On the night, Abby Van Kempen corralled in 14 rebounds to go along with her 11 points and six assists.

Minnesota Morris returns to conference play on Saturday, Jan. 26, against St. Scholastica. Game time is set for 1 p.m. inside the Cougar Sports Center.

“I was really proud of our ball movement, offensive rebounding, and our man to man defense,” head coach Paul Grove said. “It was nice to get everyone involved in tonight’s game. This is a great way to go into the last half of our conference schedule.”

For the Minnesota Morris offense, five Cougars scored in double-figures, which included a 20-point outing from senior Noah Grove. On the night, Grove went 8-of-13 from the field, including 2-of-3 from distance.

The second half was more of the same, as Morris outscored Trinity Bible College, 55-28. After scoring 15 points from the bench in the first half, the Cougars saw their bench contribute 33 points in the second half.

Morris returns to conference action on Saturday, Jan. 26, against St. Scholastica. Game time is set for 3 p.m. inside the Cougar Sports Center.