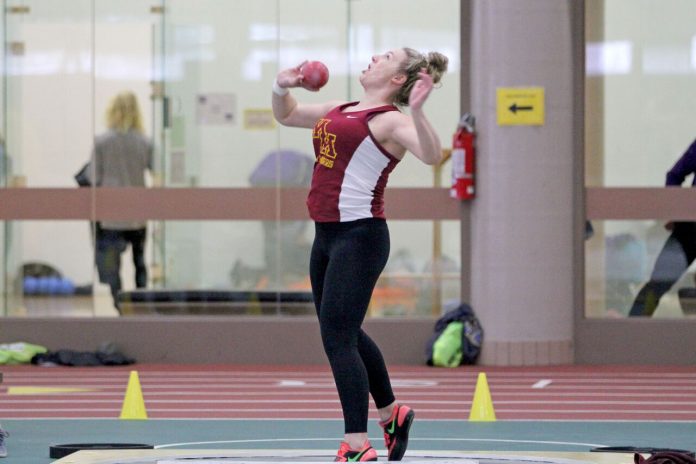 SWIMMING & DIVING
COLORADO SPRINGS – Minnesota Morris Women’s Swimming and Diving earned Team Scholar All-American Honors from the College Swimming and Diving Coaches Association of America (CSCAA) for their work in the classroom for the fall semester.

The Cougars were one of a record 713 schools across five different classifications to earn this honor. In order to achieve this recognition a team must average a 3.00 GPA or higher during the semester.

The Cougars will close out their season this Friday as they will travel to Moorhead to take on the Cobbers of Concordia the meet is scheduled to start at 6pm.

INDOOR TRACK & FIELD
MOORHEAD – The Minnesota Morris track & field program kicked off the spring semester by competing at the Cobber Open, hosted by Concordia College. The Cougars saw personal-best performances and conference-leading marks at the meet.

“The meet went really well after being back on campus for only a week,” head coach Jess Levine said. “We won multiple events and had a number of life-time personal bests, including PRs from both Katherine Novak and Tyler Sassenberg in the 3000m. Neither of them had competed yet this season so it’s nice to see some early speed after focusing on mileage over break. The throwers also saw a lot of huge PRs, and freshman Brennyn DePaulis is currently ranked No. 1 in the UMAC with her throw of 10.94m in the shot put.”

In the 60-meter dash, the Cougars finished second in both men’s and women’s races. On the men’s side Justin Pearson ran 7.15, while Jenna Benson ran 8.27 in the women’s race.

Going to the distance races, Katherine Novak won the women’s mile as she clocked in at 5:32.12. A pair of Minnesota Morris student-athletes recorded top-five finishes in the women’s 3,000-meter run as Novak took second in 11:08.69 and Paige Stearns placed fifth in 12:09.84.

In the jump events, Jasmine Terry placed ninth in the women’s high jump with a clearance of 4-8.75 and Benson took fifth in the long jump with a leap of 15-6.75.

Trent Merkins paced the Cougar men in the field events with a pair of sixth-place finishes, as he recorded a mark of 42-10.75 in the shot put and a distance of 47-4.5 in the weight throw. Also in the field, Zion Zaloudek placed eighth in the men’s pole vault with a height of 11-5.

ALL-ACADEMIC ATHLETES
ST. PAUL – Thirty-five Minnesota Morris student-athletes were named all-academic Upper Midwest Athletic Conference (UMAC) for fall 2018, as announced by the conference office on Wednesday.
Individuals who earn a 3.5 or better grade point average (GPA) or better during their respective semesters of competition are recognized with the prestigious individual honor, while the team with the top GPA in each sport is also recognized.