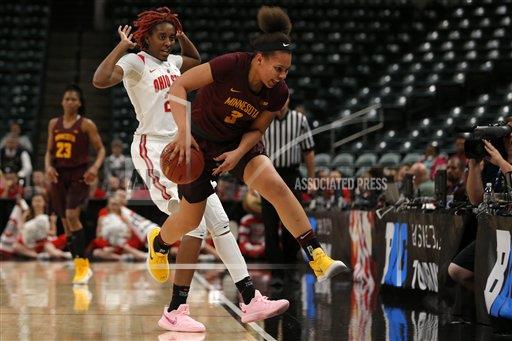 After opening conference play by making 9-of-45 (.200) 3-point attempts in the first seven games, Pitts broke out of her shooting slump by going 5-of-11 (.455) against the Boilermakers. The five made 3’s tied for the second most in a game this year, as did her 19 points. Only a 35-point outing at Boston College on Dec. 9 that featured six made 3-pointers bested Thursday’s performance. Pitts also had four assists Thursday, one off a career high.

Bell’s 17 points give her exactly 1,500 for her Minnesota career. It was her team-leading 17th game this year scoring in double figures. She also recorded her first game this season with multiple 3-pointers made. After being held to just three points on 1-of-7 shooting in the first half, Bell bounced back in the second half with 14 points by going 6-of-12 from the floor.

Junior Taiye Bello continued her strong play on the glass, pulling down 18 rebounds, including 13 on the defensive side. It’s her fifth game this year with at least 18 rebounds, and she was one off her career high of 19 set earlier this season against Arkansas-Pine Bluff. Bello also blocked three shots and scored six points while playing a full 40 minutes for the second time in her career.

Senior Annalese Lamke also contributed with nine points and eight rebounds, while fellow senior Irene Garrido Perez made the first start of her career and tied a career high with four assists.

Minnesota led 15-12 after a tight first quarter, but Purdue opened the second quarter on an 8-2 run. The Golden Gophers later found themselves down 26-19, but they scored the final eight points of the half (five by Pitts and three by Lamke) to go into the locker room up 27-26. Pitts put the exclamation mark on the half by hitting a buzzer-beating 3-pointer.

Pitts scored 13 of her 19 points in the first half, while Bello had 11 of her 18 rebounds by halftime.

A bucket by Lamke gave the Gophers a 31-28 lead with less than two minutes elapsed in the third quarter, but Purdue scored seven straight points and 13 of the next 16 to grab the lead for good.

The lead was seven for Purdue at 41-34 with 3:24 to play in the third, but the Gophers kept chipping away. They eventually made it a two-point game when a 3-pointer from Bell cut the deficit to 43-31 to open the scoring in the fourth quarter. The Boilermakers’ Ae’Rianna Harris answered, though, with a pair of baskets to push the lead back to six.

Bell made a jumper after Harris’ second basket to cut the lead to four points. The Gophers would get as close as four points two more times in the fourth, but no closer. That last such instance came with 4:08 remaining thanks to a field goal from Bello that made it a 52-48 Purdue lead. The Boilermarkers made their free throws down the stretch, though, and were 7-of-9 from the floor in the fourth quarter to help put the game away.

Minnesota was 7-of-20 from 3-point range, its most made 3’s in a conference game this year. The Gophers also had a 15-to-8 assist-to-turnover ratio, tying a season-low for turnovers.

GAME NOTES
Minnesota is 20-46 all-time against Purdue, including an 11-22 mark in Minneapolis … Minnesota had used the same lineup for the first 18 games of the year before inserting Irene Garrido Perez into Thursday’s starting five … with her five made 3-pointers, Pitts now has 130 in her career to move into ninth on the Gophers’ all-time list ahead of Kiara Buford (129) … Taiye Bello’s 13 defensive rebounds tied herself for the most by a Gopher this year; she also had 13 against Arkansas-Pine Bluff on Nov. 20 … Annalese Lamke was 3-for-3 at the free throw line and has made her last 13 from the charity stripe dating back to the third quarter of the game against Iowa.