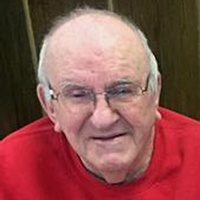 Burial will be at a later date in the St. Joseph Cemetery, rural Rosholt.  Pallbearers will be Cal’s grandchildren.

Calvin Roy Bertram was born on March 18, 1931, to William Sr. and Bertha (Itzen) Bertram.  He was baptized, confirmed and attended the Eden Reformed Church in Herman.

Calvin was raised on the Bertram farm place 5 miles west of Herman, next to 5 Mile Creek.  He attended country school (“4 miles uphill…both ways!”) and graduated from Herman High School in 1949.  One of his sports was Golden Gloves boxing that he really enjoyed.  He farmed with his father and brother until he met Deloris Jackson at the Wheaton roller-skating rink. They eloped to the Little Brown Church in the Vale on February 11, 1951.  They lived in an updated brooder house until they moved to their long-time home south of Rosholt in the beautiful Lake Traverse hills in September 1953. Linda, their firstborn child was just 6 weeks old. Pete was born June 1956 and Roxy in August 1957.

Cal farmed, raised cattle and hogs, trained and kept horses, coached church softball leagues, organized trail rides and provided horses for kids who otherwise might not have had the opportunity to ride a horse. He supported Dee’s profession as an RN, and all the various undertakings of his children, and later faithfully supported his grandchildren – especially the football games, wrestling matches and other various sporting events!

Sledding was a favorite winter sport with family, friends and neighbors which went better after Dad bought one of the first “Bolens” snowmobiles.  It was much easier getting the toboggan pulled back up the hill!   He excelled at Carrom, Canasta, Scrabble, Rummikub and various games. He and Dee spent hours playing Boggle.

Cal and Dee took many family vacations – in July! –  between spring work and harvest.  They raised their kids then cared for multiple foster kids. They later travelled to Holden Village, Oregon, Calgary Stampede with friends in Canada, Tennessee, California to visit cousins, and many other destinations.

They attended St. Joseph, Bethania, and most recently Bethlehem Covenant church.  He always dressed in a suit for church.

Cal had a stroke nine years ago which caused him to slow “…down but not out…”!  Dee cared for him on the farm until he became a resident at Traverse Care Center.  He had a smile on his face, a raised eyebrow to greet you, always a positive attitude and great sense of humor with a tendency towards mischief!

Arrangements are with Eggers Funeral Home of Rosholt, SD.