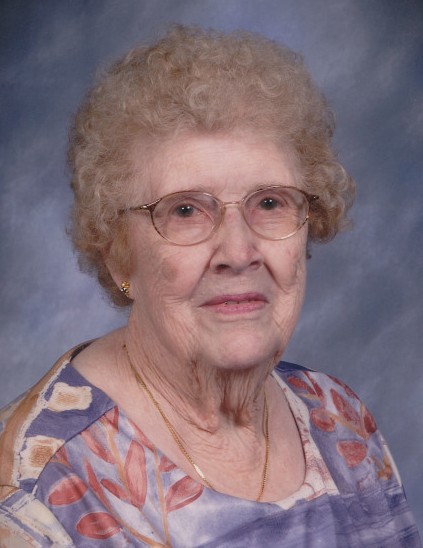 Elaine Clarice Espelien, age 91 of Starbuck, MN, passed away on Thursday, January 24, 2019, at the Glenwood Retirement Village in Glenwood.

Memorial services for Elaine C. Espelien will be held in the Spring.

Elaine Clarice Espelien, the daughter of Alfred and Severene (Mallum) Thorson was born on July 6, 1927 in Rolling Forks Township, Pope County, Minnesota.  She was baptized and confirmed at East Zion Lutheran Church in rural Starbuck.  Elaine grew up in Rolling Forks and Langhei Township and attended country school in District 62.  She was united in marriage on February 12, 1949 to Clarence Espelien at the East and West Zion Lutheran Parsonage by Reverend K.R. Palmer.  They farmed in Blue Mound Township until August of 1958 when they moved into Starbuck.

Elaine was a member of Fron Lutheran Church in Starbuck where she was active in the Ladie’s Aide.  She was also a volunteer at the Minnewaska Lutheran Home for many years.  Elaine enjoyed playing Bingo and Yahtzee and visiting friends and relatives.

Elaine is survived by her daughters: Sandra (Wayne) Block of Big Lake and Carol (Dale) Engebretson of Excelsior; four grandchildren and two great-grandchildren; and many nieces and nephews.  She is preceded in death by her husband, Clarence; her parents; two brothers: Kermit and Marvin; one sister, Alverna “Verny” Schumacher; and brothers-in-law and sisters-in-law.

Starbuck Funeral Home in Starbuck is in charge of arrangements for Elaine.