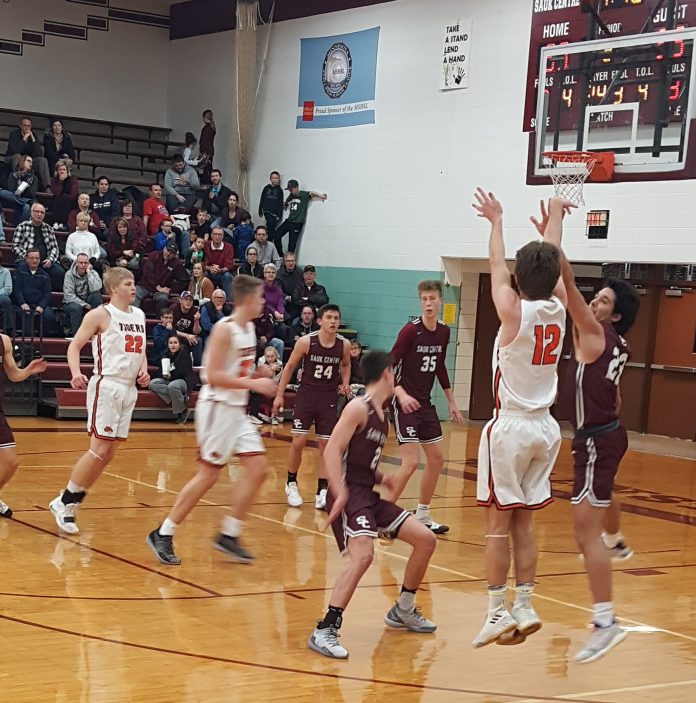 Morris Area/Chokio-Alberta 64, Sauk Centre 47
SAUK CENTRE – Camden Arndt posted a double-double and Morris Area/Chokio-Alberta pulled away late for a 64-47 win over Sauk Centre.
Arndt scored 20 points with 10 rebounds and five assists for the Tigers who never trailed after erasing a seven-point deficit by closing out the first half on a 17-5 run.
Jackson Loge had 15 points with nine rebounds, and Zach Hughes chipped in 10 points for the Tigers who are 8-7 overall, 5-5 in the West Central Conference.
Jacob Jennissen had 17 points with 13 rebounds for the Mainstreeters who were held to 28 percent shooting, Casey Schirmers added 14 points as they fall to 6-9, 3-5 in conference.

Hancock 69, Lac qui Parle Valley 57
HANCOCK – Hancock got contributions all over the floor and pulled away from Lac qui Parle Valley in the second half for a 69-57 win on Friday.
Peyton Rohloff posted a double-double with 15 points and 10 rebounds, Bennett Nienhaus had a game-high 25 points with seven rebounds.
Connor Reese had nine points with seven boards and five assists, Daniel Milander added nine points with five steals, and Cole Reese dished nine assists while scoring eight, the Owls are 11-3 on the season. Maverick Conn had 15 points for the Eagles who fall to 9-7.

Minnewaska 42, Montevideo 37
MONTEVIDEO – Minnewaska erased a five-point halftime deficit by holding Montevideo to 11 second half points for a 42-37 victory.
Shawn Carsten had 15 points and five rebounds, Luke Barkheim added 10 points for the Lakers who are 10-6 overall, 6-3 in conference.
The Thunder Hawks got 11 points from Sam Olson, Cole Sandven added 10 as they fall to 1-13, 1-9 in the West Central Conference.

Underwood 56, Hancock 44
UNDERWOOD – Hancock was held to 32 percent shooting, losing to Underwood 56-44.
The Owls were just 3-15 from three-point range and got out-rebounded 34-26. Rylee Hanson led with 15 points, Lexi Staples added 10 while Tori Pahl grabbed nine rebounds and Hancock falls to 6-8.
Brooke Hovland had 18 points and Kayla Rocholl added 16 for the Rockets who are 14-2.

Crookston 2, Morris/Benson Area 1
CROOKSTON – Grace Koshney made 24 saves and Crookston held on for a 2-1 win over Morris/Benson Area on Friday.
Dillynn Wallace and Catherine Tiedmann put the Pirates up 2-0 before Taryn Picht cut the deficit in half at 11:33 of the second period. Koshney shut the door from there for the win and the Pirates improved to 4-15-1. Leah Thompson stopped seven shot for the Storm who are 3-18.