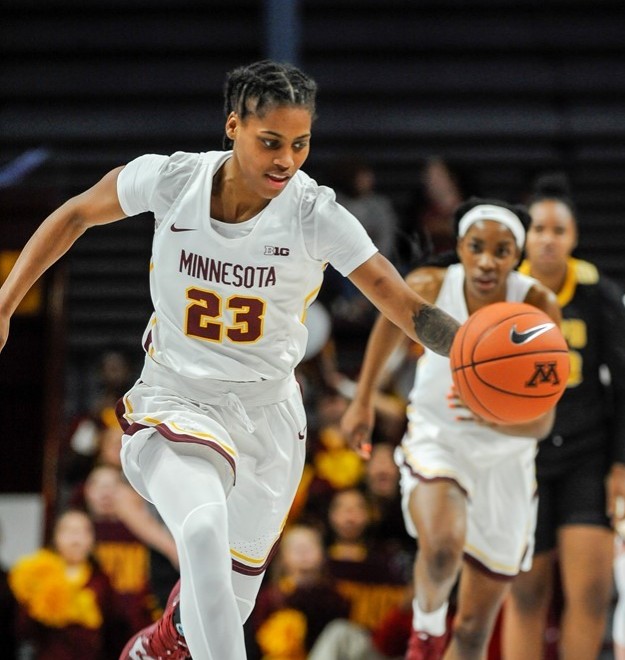 Bello’s double-double was her team-leading eighth of the season as she went for 12 points and 18 rebounds, one off a career high. Of the 18 rebounds, 13 were on the defensive end. She now has six games this year with at least 18 rebounds, including each of the last two games, and she’s reached double-figure rebounds in 14 contests. Bello had nine rebounds in the first quarter alone and had 17 by the end of the third quarter. She also blocked four shots.

Sophomore Destiny Pitts continued her hot shooting as she finished with a team-high 19 points for the second straight contest. Pitts was 7-of-13 from the floor, including 5-of-9 from 3-point range. After opening conference play by making 9-of-45 (.200) 3-point attempts in the first seven games, Pitts has gone 10-for-20 (.500) in the last two games. She now has 135 made 3-pointers in her career, passing Shannon Loeblein (133) for eighth in Minnesota history. Pitts, who played all 40 minutes, fadded four assists and four rebounds.

Senior Kenisha Bell was the third Gopher to reach double figures as she recorded 16 points, nine of which came at the free throw line. She matched Pitts for the team lead with four assists.

The game was close throughout the first half as Minnesota held a 16-10 lead after the first quarter. The lead got as large as eight points for the Gophers twice in the second quarter, the last of which came on a Pitts 3-pointer with 2:27 to play in the opening half that put the team up 28-20. Ohio State scored the final five points, though, to make it a 28-25 Minnesota lead at intermission.

A 3-pointer from senior Irene Garrido Perez, who was making the second start of her career, gave the Gophers a 32-25 cushion early in the third quarter, but Ohio State countered with an 10-0 run. Down 37-34, Pitts made another clutch 3-pointer to even the game with just over five minutes remaining in the quarter. Back-and-forth scoring then made it 43-43 entering the fourth quarter.

A jumper from Bello would put Minnesota ahead 45-43 to open the final frame, but that would be the last time the Gophers would be in front. Ohio State rattled off 16 straight points to take control of the contest and win for the fifth straight time in the series.

A late 6-0 run for Minnesota cut the Buckeye lead down to single digits, and the Gophers got as close as seven points with 30 seconds remaining at 62-55 on another 3-pointer from Pitts. But made free throws down the stretch kept Ohio State ahead.

Minnesota continues a run of three games in six days as it heads to Evanston, Ill., to meet Northwestern (13-7, 6-3) Thursday night. Tip-off is scheduled for 7 p.m.