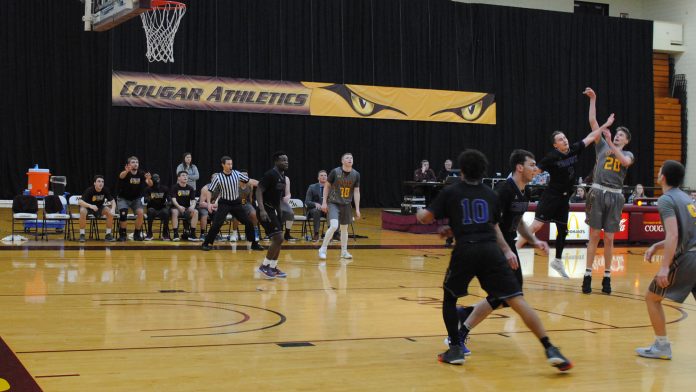 “That was not a typical Crown-Morris game,” head coach Paul Grove said. “But if we have to win it this way, then we will. ”

Thursday’s game was a close-contest between two teams fighting for a spot in the Upper Midwest Athletic Conference (UMAC) Tournament as the game remained within single-digits during the entire 45 minutes of play.

The Cougars held their largest lead of the night at 55-46 as Nick Peterson made a jumper with 7:18 to go in the second half. The Storm would go on to outscore the Cougars, 17-8, to make it 63-63, as Josh Volness connected on a jumper with 42 seconds left.

Pendleton then stepped up for a clutch basked with 20 seconds remaining in regulation to give Morris a 65-63 lead. As time expired in regulation, Volness beat the buzzer and was able to force overtime with the score tied at 66-66.

During the extra frame, it was the Morris seniors that led the way, as Grove, Jeffrey Halverson and Jeremy Halverson scored eight of the 10 points for the Cougars.

The Cougars took a 68-66 lead on a basket from Pendleton with 3:38 to go, but Crown scored five straight points to make it 71-68. Minnesota Morris responded with back-to-back baskets from Jeffrey Halverson to put Morris up 72-71.

With just eight seconds to play, Jeremy Halverson’s free throw put the Cougars up 76-74 and then Adam Lechelt’s 3-pointer at the buzzer was no good to secure the victory for the Cougars.

Minnesota Morris travels to Mankato, Minnesota, to take on Bethany Lutheran on Saturday, Feb. 2, with tip-off set for 4:45 p.m. Bethany Lutheran is currently in second in the UMAC standings with a record of 10-2.

WOMEN’S BASKETBALL
MORRIS – The University of Minnesota Morris women’s basketball team defeated Crown College, 68-34, to clinch a berth in the 2018-19 Upper Midwest Athletic Conference (UMAC) Tournament. With the victory, Minnesota Morris is now 13-7 overall and 9-2 in conference play, while Crown falls to 3-17 overall and 1-10 in UMAC contests.

For the Cougar offense, Kendra Raths tallied 19 points, while Becca Holland recorded a double-double on 10 points and 10 rebounds.

“You never know coming into these games,” head coach Tim Grove said. “We wanted to come out and take care of things defensively, which we really did a good job of.”

The Cougars used a 10-2 run over the first 4:41 of the game to get things going. With the first quarter of play in the books, Minnesota Morris held a 15-7 lead over the visiting Storm.

For Raths, she scored eight points during the second period when Minnesota Morris outscored Crown College by a margin of 20-6. Following the halftime break, Raths scored six straight points to extend the Cougar lead to 41-13 with 8:19 to go in the third period. She then book-ended the third period with a 3-pointer with three seconds left.

During the fourth quarter, Morris outscored Crown, 18-17, to close out the game.

As a team, the Cougars went 26-of-55 from the field, which included 13-of-25 during the second half of action. The Cougars also capitalized on points off of turnovers as they outscored the Storm by 21-10 off of miscues.

The Cougars now head to Mankato, Minnesota, to take on Bethany Lutheran on Saturday, Feb. 2, with a tip-off time of 3 p.m. Bethany Lutheran heads into the contest tied for the UMAC lead with a record of 11-1.