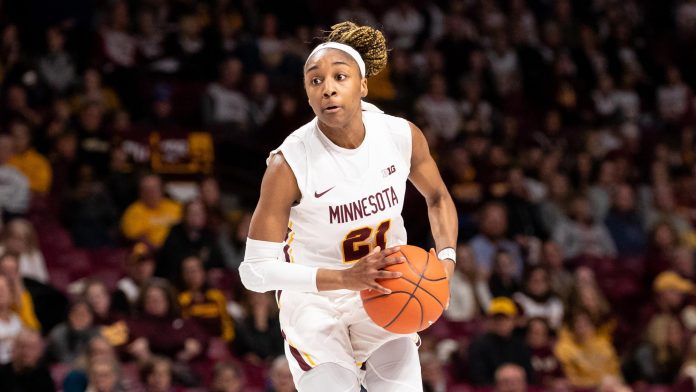 Sophomore Destiny Pitts led all scorers with 19 points, while senior Kenisha Bell added 17 and junior Jasmine Brunson posted 14 as the Gophers won their third in a row over the Wildcats and third straight in Evanston.

Pitts’ 19 points came on 5-of-7 shooting from the floor and 6-of-7 at the free throw line. Through the first seven games of Big Ten play, Pitts was averaging 9.6 points per game while shooting 33.8 percent on field goals and 20.0 percent on 3-pointers, making 9-of-45 attempts from beyond the arc. Since then, she has scored 19 points in three straight games while shooting 48.7 percent from the floor and 52.0 percent on 3-pointers (13-for-25).

With her 17 points, Bell moved into ninth on the Gophers’ all-time scoring list ahead of Kiara Buford (1,532) with 1,533 points. Bell also had four steals, four rebounds and three assists.

Brunson’s 14 points marked her second-highest scoring output of the season, bettered only by 17 points against Illinois on Jan. 6. In fact, she had scored 14 points total in the previous five games combined. She also led the Gophers with five assists and matched Bell with four steals, tying a career high.

The Gophers forced Northwestern into 19 turnovers, the second-most turnovers by an opponent in 10 conference games, while Minnesota’s 10 steals were their most in any league game this year. The defense also forced the Wildcats to just 37.7 percent shooting, the lowest by an opponent in conference play this season.

Minnesota led 19-10 after the first quarter, thanks in part to nine turnovers forced, including six in a span of 3:15 at one point. Northwestern was held without a field goal for the final 7:07 of the frame.

The Wildcats turned the tables though in the second quarter as they used a 9-0 run to erase an 11-point deficit. The outscored the Gophers 18-11 in the quarter, but Minnesota still held a 30-28 halftime advantage. Bell scored 12 points in the first half, including nine in the first quarter alone.

Minnesota came out firing in the second half, scoring the first nine points to push the lead to 39-28. Pitts and Bell sandwiched jumpers around a layup from Taiye Bello, while Pitts capped the run with one of her three 3-pointers. The Gophers’ largest lead of the game came with 49 seconds remaining in the third after a jumper by Brunson made it 48-34.

The Gophers had outscored the Wildcats, 18-6, at the time of Brunson’s jumper before Veronica Burton banked in a 3-pointer from halfcourt to trim the Gophers’ lead to 48-37 entering the fourth.

In the fourth, Northwestern slowly chipped away at the Gophers’ lead. After a jumper by Brunson put Minnesota ahead 54-43 with 6:13 to go, the Wildcats scored six straight to close the gap to five points with 2:53 to play.

Pitts provided relief though when she knocked down a big 3-pointer from the top of the key to stop the run and push the lead back to eight with 2:32 to play. Northwestern fought back, however, to score the next five points to make it a three-point game with 29 seconds to play.

Pitts remained clutch down the stretch, though. She made a pair of free throws to give Minnesota a 59-54 lead with 26 seconds to go, and after a missed jumper by Northwestern, she made two more to get the game to its final score.