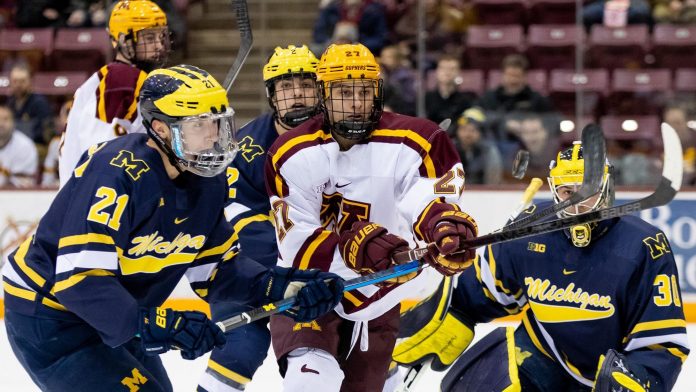 MEN’S HOCKEY
MINNEAPOLIS – Minnesota’s special teams continued to find success on Friday night but Michigan came out on top with a 4-2 win in this weekend’s series opener at 3M Arena at Mariucci.

The Gophers (10-12-4 overall, 7-7-3-0 Big Ten) went 2-for-7 on the power play and 5-for-5 on the penalty kill as Rem Pitlick notched his third-straight multi-point game while playing in his 100th career game. The Maroon & Gold have now tallied on the advantage in six-straight games and nine of the last 11 contests while the penalty kill hasn’t surrendered a goal in four-straight games and eight of the last nine contests.

Pitlick and Minnesota jumped out to a first period lead with a goal on the night’s first power play at 4:35 of the opening stanza. The junior forward picked up his 16th goal of the year with assists from Tommy Novak and Tyler Sheehy.

But Michigan (10-10-6, 6-5-4-2) rattled off three-straight goals from Will Lockwood in the first and Garrett Van Wyhe and Michael Pastujov in the second to take a 3-1 lead into the final frame. Pastujov’s tally – the eventual game winner – came moments after Minnesota successfully killed an extended 5-on-3 situation.

Brannon McManus brought Minnesota within one with a power-play goal set up by Pitlick and Novak at 12:34 of the third, but a shorthanded tally from Nicholas Boka soon after halted the comeback permanently.

The Gophers were outshot 45-26 in the loss with Mat Robson making 41 saves to move to 8-8-4 on the year. Hayden Lavigne earned the win for the Wolverines with 24 saves, improving to 6-6-3.

Minnesota closes out a four-game home stand tomorrow night against Michigan at 3M Arena at Mariucci.