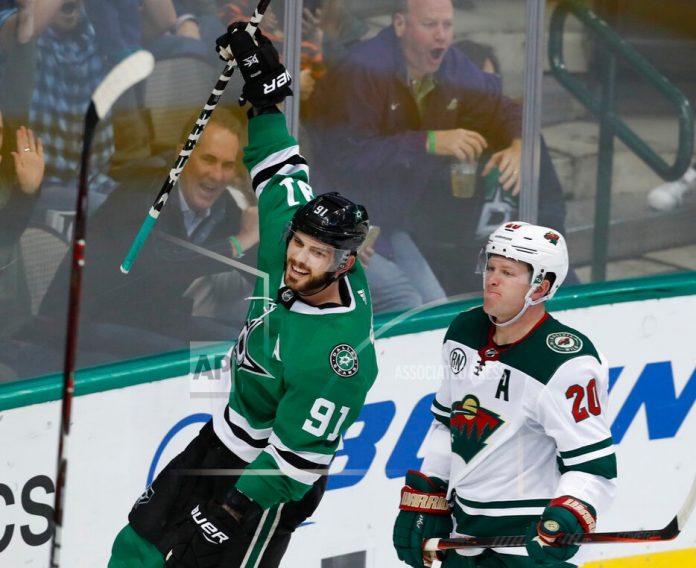 With the game tied at 1, Mattias Janmark took the puck along the boards in the neutral zone and passed across the blue line to Seguin. His slap shot from the top of the right faceoff went under Minnesota goalie Devan Dubnyk and trickled into the net with 7:42 left.

Seguin added an empty-net goal, his 20th of the season, with 24 seconds to play. The Stars won their third in a row and stopped the Wild’s three-game winning streak.

Ben Bishop followed a shutout win on Wednesday with a 21-save effort against the Wild. He protected the lead by stopping a backhand attempt by Minnesota’s Marcus Foligno with 6:25 remaining.

Dallas’ Andrew Cogliano and Minnesota’s Brad Hunt scored in the second period, which ended 1-all.

Cogliano tipped in Roman Polak’s shot from the right point for a 1-0 lead at 3:12 of the second.

That goal ended a drought of 74 minutes, 33 seconds without a score by either team in Dallas’ two most recent games. When Cogliano went off with a high-sticking double minor two minutes later, those were the first penalties by either team in 75:06 of ice time in the same games.

Hunt tied the game at 8:48 of the second during the power play for Cogliano’s second penalty.

NOTES: Cogliano’s fourth goal of the season was his first for the Stars in five games since being acquired from Anaheim in a trade on Jan. 14. . Dallas C Jason Dickinson left Wednesday’s game with a lower-body injury and is expected to miss both games this weekend. . Wild C Matt Hendricks played in his 600th NHL game. . Entering the game, Minnesota led the Stars by one point in the standings, with the difference the Wild’s point for an overtime loss vs. Dallas. Minnesota’s goal differential was 0, and Dallas was at minus-1. The teams had split the first two meetings. Dallas has six goals in the three games between the teams and the Wild have five.

Stars: Play the second game of a back-to-back at Nashville on Saturday.