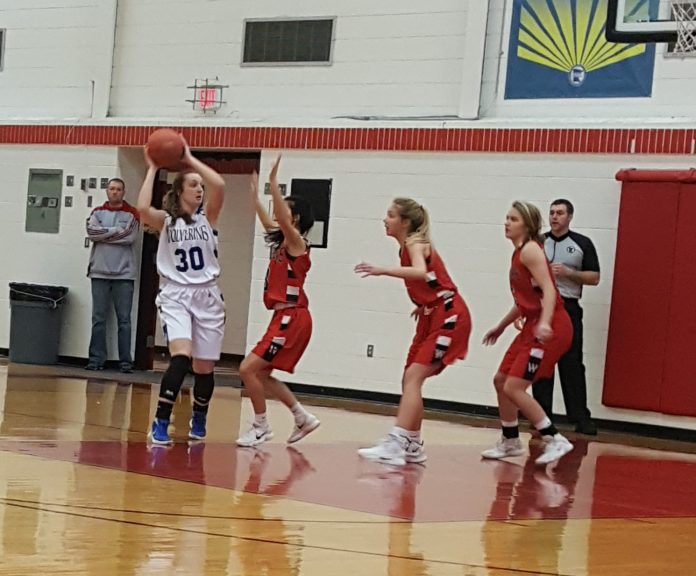 BOLD 65, Morris Area/Chokio-Alberta 52
MORRIS – Morris Area/Chokio-Alberta went 0-18 from three-point range and shot just 27 percent for the game in a 65-52 loss to BOLD at the Tiger Center on Friday.
Malory Anderson posted a double-double with 15 points and 12 rebounds, Maddie Carrington and Emma Bowman each had 13 points for the Tigers who trailed by six at the break, but just couldn’t close the gap in the second half and saw their six-game win streak come to an end, falling to 10-6, 4-4 in the West Central Conference.
The Warriors are 15-4 overall, 9-2 in conference.

Wheaton/Herman-Norcross 57, Clinton-Graceville-Beardsley 49
WHEATON – Wheaton/Herman-Norcross used a 10-0 run midway through the second half to surge ahead of Clinton-Graceville-Beardsley, and hung on for a 57-49 win in Wheaton.
Trailing 38-34 with nine minutes remaining, the Warriors scored 10 straight to go up by six and never trailed again.
Izzy Schmidt had 15 points with 12 rebounds, Maycee Tolifson scored all 13 of her points in the second half to spark the Warriors offense after they shot just 21 percent in the first half. Ellissa Rinke added 11 points and the Warriors are now 7-10 overall, 4-4 in the Pheasant Conference.
Reanna Ward fouled out with 15 points and 10 rebounds, Emma Botker tallied 13 points with 19 boards but the Wolverines four-game win steak was snapped and they fall to 12-5, 6-3 in conference.

West Central Area 88, Hancock 57
BARRETT – Brynn Fernholz scored a career-high 29 points and West Central Area shot 50 percent from the field for an 88-57 rout over Hancock.
Ella Van Kempen recorded her 1,000th career point early in the second half and finished with 13 points, Lexi Bright added 13 for the Knights who were 14-21 from three-point range.
Rylee Hanson had 19 points with eight rebounds for the Owls, Lexi Staples added 11 with eight boards as they fall to 6-9 overall, 2-5 in the Pheasant Conference.
The Knight meanwhile improve to 12-6 overall, 7-1 in conference play.

Red Lake Falls 4, Morris/Benson Area 1
MORRIS – Red Lake Falls scored four unanswered goals for a 4-1 win over Morris/Benson Area on Friday at the Lee Community Center in Morris.
Jack Riley scored on a feed from Tyler Buss to give the Storm a 1-0 lead at 13:10 of the first, but the Eagles would tie it before the intermission, and Zak Kennett tallied a hat trick over the next two periods as Red Lake Falls pulled away.
Andrew Johnson stopped 32 shots and the Eagles are 5-7, Peyton LeClair had 20 saves for the Storm who are 6-11.

MAHACA 41, Border West 33
GRACEVILLE – MAHACA built up a big lead early and held on for a 41-33 victory over Border West from Graceville.
The Tigers got pins from Davin Rose, Ethan Lebrija, Jed Feuchtenberger, Ben Travis, and Brady Cardwell who recorded his 75th career win. Dylan Rose won a major decision for the Tigers while Dalton Rose won by forfeit, and Gideon Joos won an 11-8 decision.
The Bucs roared back late with pins by Isaac Neal, Lance Nelson, Michael Dennis, and Isaac Ebnet. Eli Larson won a 6-4 decision and Allen Bazoff won by forfeit.