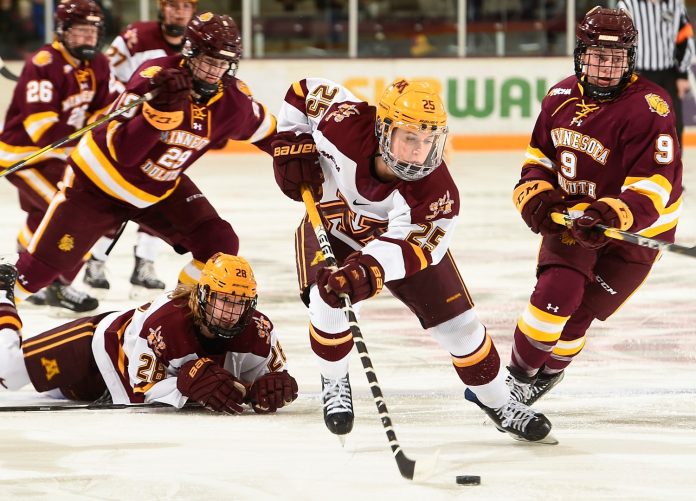 Meanwhile, Sheehy picked up his third career four-point performance with a goal and three assists while Pitlick tallied a goal and two assists. The pair of forwards have now both tallied points in 17 of the last 18 games for Minnesota.

The Gophers jumped out to a great start on Saturday night with three unanswered goals. Tyler Nanne opened the game with his third goal of the year at 9:19 of the first period after being set up by Pitlick and Sheehy with Pitlick scoring his team best 17th of the year during a power play at 16:50 of the opening stanza off assists from Sheehy and Brent Gates Jr. Sheehy added to the lead 41 seconds into the second period with his eighth of the year, again with an assist from Pitlick as well as Jack Sadek.

It was in the game’s final 20 minutes that the Maroon & Gold struck again on the power play as Tommy Novak’s one-timer at 6:18 found the net for the eventual game winner. Novak’s third of the year was set up by Brannon McManus and Sheehy. With the primary assist, McManus pushed his career-long point streak to eight games.

Mat Robson picked up the win for the Gophers, making 31 saves to improve to 9-8-4 on the season. Hayden Lavigne surrendered three goals on 11 shots in the first 20:15 of play before being relieved by Strauss Mann in the second period. Mann took the loss for the Wolverines to fall to 4-5-3 while making 10 saves on 11 shots.

Minnesota starts a four-game road trip next weekend with a Big Ten series at Penn State.

WOMEN’S BASKETBALL
MINNEAPOLIS – Going to overtime for the third time in four meetings between the schools this season, No. 2 Minnesota fell at home to Minnesota Duluth Saturday afternoon, 3-2.

The overtime-winner came with 1:21 to play. Kailee Skinner took a shot from the blue line that was saved by Gulstene. Unfortunately, the rebound kicked away and Naomi Rogge was able to lift it past a diving Gulstene to record her 10th goal of the year and cap off a back-and-forth contest.

Minnesota got the game’s first goal with 6:05 to play in the opening period.

Bulldogs defenseman Jalyn Elmes tried to make a pass in front of her own net, but Gophers freshman Taylor Heise and was able to get her stick on the puck and disrupt the play. Potomak took advantage of the loose puck and one-timed it past Rooney for her fifth goal of the season. Heise was credited with her 18th assist of the season on the play.

Defenseman Lizi Norton connected on a cross-ice diagonal pass with Kylie Hanley, who skated up along the boards on the right side and backhanded a shot. Gulstene was able to get a piece of the shot, but not could not prevent it from sliding across the goal line.

UMD then pulled ahead 2-1 less than two minutes into the second period when Gabbie Hughes took possession in the Gophers’ offensive end and skated up the ice while fending off three Gophers en route to her team-leading 14th goal of the season.

Approaching the midway point of the period, Zumwinkle knotted the game up at 2-2.

Coming off a faceoff in the UMD end, senior Nicole Schammel poked the puck out ahead to Zumwinkle. Skating up the right side, the Excelsior, Minn., native wristed a shot that Rooney saved but didn’t secure. Zumwinkle regained possession and buried it for her team-best 22nd goal of the season with 11:33 left in the second stanza. The assist was the 27th of the year for Schammel, also most on the team.

Neither team was able to score in the third period, though Minnesota owned a 12-4 advantage in shots on goal. The Bulldogs nearly won it in regulation, however, when Maggie Flaherty’s dump-in deflected off a Minnesota player and off the pipe with just seconds remaining before the overtime period.

The two teams will conclude the series Sunday afternoon at 1 p.m. at Ridder Arena.