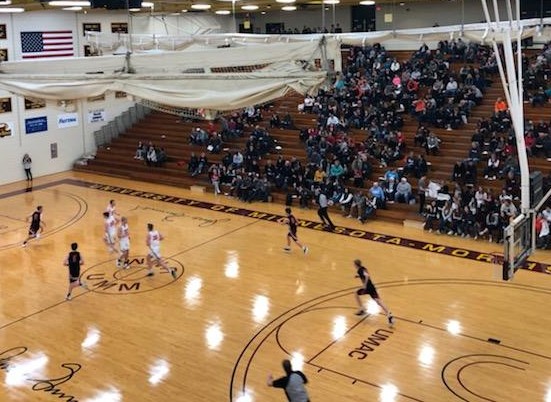 West Central Area 66, Morris Area/Chokio-Alberta 60
MORRIS – West Central Area raced out to a 14-2 lead before hanging on for a back-and-forth victory over Morris Area/Chokio-Alberta 66-60 at the Cougar Sports Center on Saturday.
Hailey Bennet led all-scorers with 21 points, Ella Van Kempen had 17 with eight rebounds, and Lexi Bright added 17 points and six steals for the Knights.
Neither team shot the ball well, but the Knights were able to force 21 turnovers and held a 47-29 rebounding advantage, improving to 13-6 on the season.
Malory Anderson led the Tigers with 17 points and 13 rebounds, Maddie Carrington had 14 with nine boards, and Emma Bowman added 12 off the bench. The Tigers are 8-8.

Morris Area/Chokio-Alberta 78, West Central Area 56
MORRIS – Camden Arndt and Jackson Loge each posted double-doubles while reaching milestones to lead Morris Area/Chokio-Alberta past West Central Area 78-56.
Arndt needed 12 points to reach 1,000 for his career, and did so by halftime when he scored 13 with 11 rebounds. Loge had a career-high 34 points while grabbing 11 boards.
The Tigers shot over 50 percent from the floor and held the Knights to just 33 percent.
Durgin Decker had 13 points off the bench and Jaret Johnson added 11 for the Tigers who are 9-7.
Jack Van Kempen and Grant Beuckens each scored 15 for the Knights who fall to 10-5.

Hancock 52, Kerkhoven-Murdock-Sunburg 49
MORRIS – Bennett Nienhaus hit four threes to finish with 18 points and Hancock held off a late rally by Kerkhoven-Murdock-Sunburg for a 52-49 win on Saturday.
The Owls led by as much as 12 in the second half before the Saints battled back to trim the deficit down to one, but the Owls clamped down defensively in crunch time for the win.
Cole Reese had 13 points, Daniel Milander added seven points with three steals while Peyton Rohloff chipped in six points with six rebounds.
Alex Call led the Saints with 15 points, Isaac Call added 11, and Ethan Hauge scored nine with 11 rebounds but KMS fell to 8-8. Hancock is 12-3 with the win.

Wheaton/Herman-Norcross 65, Underwood 53
MORRIS – In a game that featured 13 lead changes, Wheaton/Herman-Norcross used a second half surge to grab the lead, and pulled away late for a 65-53 win over Underwood.
The Rockets rallied late in the first half to take a 28-25 lead into the break, but the Warriors shot 42 percent from the floor the gain the lead midway through the second half and held Underwood to just 30 percent shooting.
Matt Thielen led all-scorers with 23 points and six rebounds. Thielen was complimented by a three-headed attack from Michael Franzese, Nick Lupkes, and Zach Stueve who each had 10 points with five boards, helping the Warriors improve to 6-9.
Krosby Aasness led the Rockets with 16 points, Canaan Kugler had 11 points with 11 rebounds, and Winston Heifort added 10 points and 10 boards as they fall to 2-13.

Park Christian 61, Clinton-Graceville-Beardsley 60
MORRIS – Sam Adelman’s shot as time expired was blocked and Park Christian held on for a 61-60 win over Clinton-Graceville-Beardsley.
The Falcons overcame 7-22 shooting from the foul line and erased a 12-point second half deficit by holding the Wolverines to 34 percent from the floor to improve to 7-12.
Tanner Brunsberg scored 30 points and Ethan Jorgenson added 18 for the Falcons. Caleb Cardwell had 20 for the Wolverines, Adelman finished with 15 and 13 rebounds. Charles Kleindl added 11 for CGB who fall to 2-14.

Worthington 3, Morris/Benson Area 2
WORTHINGTON – Rosie Melgoza’s goal at 9:58 of the third period broke a 2-2 tie and Worthington defeated Morris/Benson Area 3-2 on Saturday.
Karlie Bruns opened the scoring at 3:54 of the first giving the Storm a 1-0 lead before the Trojans tallied two second period goals. Kortney Sanasack netted the equalizer at 2:39 on a feed from Chloe Zimmel.
Leah Thompson had 25 saves for the Storm who fall to 3-19. Lilyana Newman had 22 saves for the Trojans who are 5-16.