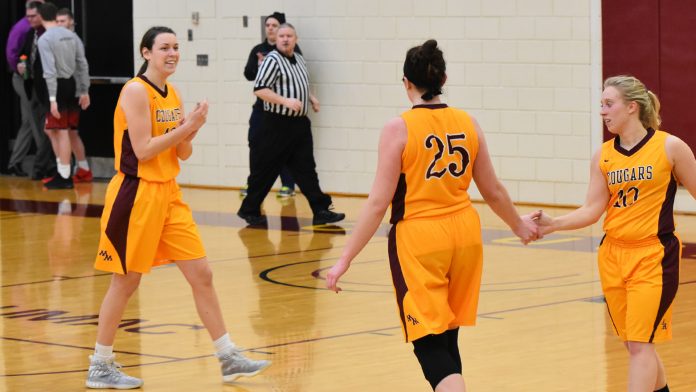 The Knights jumped out to an 11-point lead less than six minutes into the game and didn’t look back. At halftime, the Knights led the Cougars, 38-19.

With 8:45 left in regulation, Jeffrey Halverson made a pair of free throws to bring the game within 13 points at 54-41, but the Knights went on a 12-5 run to extend their lead to 20 points.

The Cougars are back home on Saturday, Feb. 9, against North Central. The game is scheduled for 4:45 p.m. Prior to the men’s game, the Cougar Sports Center renaming ceremony will take place on Jim Gremmels Court.

“I really loved the way we shared the ball tonight,” head coach Tim Grove said. Twenty-two assists on 27 made field goals is outstanding. On a night where we struggled from the 3-point line we did a great job of getting quality paint touches.”

With the win, Minnesota Morris improves to 14-8 overall and 10-3 in Upper Midwest Athletic Conference (UMAC) play. Martin Luther is now 1-21 overall and 1-13 in conference action.

The Cougars and the Vikings opened the game trading baskets to make it 6-5 in favor of Minnesota Morris, but then the Cougars ended the first quarter on a 16-4 run to secure a 22-4 lead. Raths scored eight of her 21 points over the first 10 minutes.

After allowing nine made baskets by the Vikings in the first half, the Cougar defense allowed just four made baskets in the second half.

Minnesota Morris picked up where it left off in the first half by outscoring the Vikings, 19-9, in the third period. With the score in favor of Minnesota Morris 59-31 after three quarters, the Cougars outscored the Vikings by nine in the fourth to secure the 75-38 win.

Along with her 22 points, Van Kempen brought in 10 rebounds for her sixth double-double of the season.

The Cougars return home to host North Central on Saturday, Feb. 9. Game time is set for 3 p.m. at the Cougar Sports Center. Prior to the women’s game, the Dacotah Deck dedication will take place at 2:30 p.m. Following the women’s game, the Minnesota Morris Athletic department will be hosting the Cougar Sports Center renaming ceremony on Jim Gremmels Court.