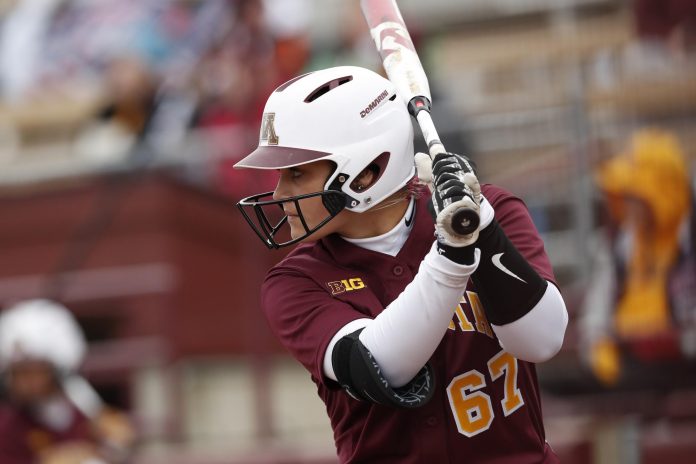 MEN’S HOCKEY
UNIVERSITY PARK – Tyler Sheehy scored a pair of goals for the Gophers on Friday night, but it wasn’t enough as Minnesota dropped a 7-2 conference contest to No. 18 Penn State at Pegula Ice Arena.

Minnesota (11-13-4 overall, 8-7-3-0 Big Ten) surrendered five-straight goals to Penn State before Sheehy’s initial tally of the game – a power-play goal set up by Rem Pitlick and Brannon McManus in the second period. Pitlick (10 games) and McManus (nine games) both extended their career-long point streaks on the play while the power play (1-for-4) found the net for the eighth-straight game.

Down 6-2 after the first 40 minutes, Sheehy lit the lamp again less than a minute into the third period for his 10th goal of the season – this time being set up by Jack Sadek and Brent Gates Jr. Sadek continued his best offensive season for the Gophers with his 10th assists and 13th point of the year.

Mat Robson took the loss for Minnesota, making six saves on nine shots to move to 9-9-4 on the year. Eric Schierhorn took over in goal midway through the first period with 29 saves on 33 shots. Peyton Jones made 24 saves to pick up the win and improve to 11-7-2.

Minnesota and Penn State meet for the fourth and final time during the regular season on Saturday at 5 p.m. CT on the Big Ten Network. Tickets for the Maroon & Gold’s remaining two home series against Notre Dame (Feb. 22-23) and Arizona State (March 1-2) are available at GopherSports.com.

SOFTBALL
ORLANDO – UNF threatened right away in the top of the first by loading the bases with zero outs but starting pitcher Carlie Brandt was able to settle in and get out of trouble. The Gophers responded in the bottom of the frame when Katelyn Kemmetmueller smacked a shot to deep right center scoring two.

It was smooth sailing from there on for Brandt and the Gophers. Brandt did not allow a hit in the second or third inning. She took the victory in the circle in three innings of work and finished with four strikeouts.

Rachel Lowary pitched the final two innings and was near flawless. She did not allow a hit and struck out two batters.

The Minnesota bats came alive in the fourth inning with an 11-run frame. Brander hit a bases clearing double and a home run to account for five of the runs. Maddie Houlihan brought in two runs in the inning and Ellee Jensen, Emma Burns and Natalie DenHartog all piled on RBIs as well. Jensen, Brandner and Kemmetmueller all finished the game with multiple hits.

Fiser dominated the second game of the evening as the offensive trickled in runs throughout. Minnesota scored in five frames with freshmen Josey White and Ali Lindner both making big impacts at the plate. White went 2-2 with an RBI and Lindner smashed her first collegiate home run. Senior Maddie Houlihan was a steady presence each time she stepped up. She went 3-4 and tacked on two runs.

White delivered the first run of the game right away in the top of the first with a timely two-out single through the left side. Kemmetmueller continued her strong day with a sacrifice fly that brought in Houlihan in the third.

Lindner provided the Gophers with a cushion with her fourth inning home run that scored two. It was also the first hit of her collegiate career. In the fifth inning, the Gophers put on a double steal as DenHartog swiped second and Kemmetmueller safely slid into home for another run.

Fiser had her day come to a close after five innings. The preseason All-American was in form from the start with nine strikeouts, just one walk and no hits allowed on the evening. Hannah Bailey closed out the game with one strike out in two innings.

Houlihan and Brandner closed out the scoring in the sixth inning with back-to-back doubles that each brought in a run.

The Maroon and Gold will have a short rest before they take on Ole Miss at 9 a.m. CT tomorrow.