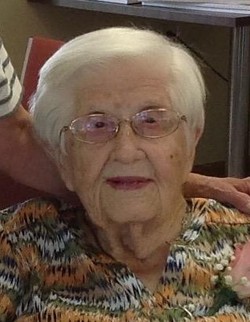 Funeral Services for Maxine will be held Thursday, February 14, 2019, at 11:00 a.m. at Bethlehem Covenant Church in Wheaton with Pastor Tim Shekleton officiating. Organist will be Cheryl Shekleton with special music provided by Laura Heide. A Eulogy will be given by Don Montonye.

Visitation will be held Thursday morning one hour prior to service time at the church.

Interment will be in Wildwood Cemetery in the spring.

Maxine was born on May 31, 1917, in Taylor Township, Traverse County, MN, to Max and Louise Dalziel. Maxine was educated in rural District 28 School in Taylor Township, until the eighth grade and graduated from Wheaton High School in 1935. Upon completion of Teachers Training School in Wheaton, she taught in rural schools in Traverse, Wilkin, and Ottertail counties from 1936 until 1957. She began teaching in Wheaton Public Schools in 1957, where she taught elementary school until retirement in 1981. While teaching she earned a BS degree in education from Moorhead State University, Moorhead, MN, in 1964. Maxine’s life was a testament to the importance of education. She was honored as Traverse County Teacher of the Year for the 1979-1980 school year. She loved following her past students and remembered most by name. Even after her retirement, her great nieces and nephews recall Maxine orchestrating Christmas lessons before presents could be opened, and closely following their own educational paths.

Maxine was married to Olen O. Lupkes of Wheaton on October 12, 1946, at the First Presbyterian Church of Wheaton. Maxine and Olen lived at the home they built in Wheaton from 1949 until 2013. They enjoyed wintering in Edinburgh, Texas, after retirement. Their Texas friends included people from Traverse County as well as those from many other Midwestern states.  They also enjoyed traveling extensively throughout the USA and Canada.

Olen and Maxine lived at Prairie View Center in Wheaton from 2013, until 2018, before entering Traverse Care Center in August 2018. Even while less able to travel she and Olen remained in contact with their community and the world by extensive reading of newspapers and magazines and the cultivation of friendships with new generations of friends.  Family and friends remember Maxine for her active and sharp mind and her wonderful memory. Maxine enjoyed being an excellent reference for questions about her community, friends, and family. She was very proud of her Scottish ancestry.

She is preceded in death by her parents, her sisters and brothers-in-law; Beth and Dick Gebhart and Shirley and Jerome Bickel and an infant brother.

Arrangements are with Bainbridge Funeral Home of Wheaton, Minnesota.