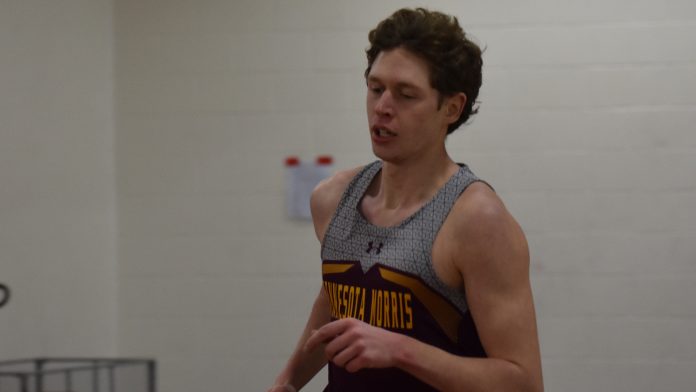 INDOOR TRACK & FIELD
COLLEGEVILLE –Tyler Sassenberg became the first Minnesota Morris student-athlete to break 16-minutes in the men’s indoor 5,000-meter run with his time of 15:59.71 Saturday at the CSB-SJU Invite.

“For the most part today was pretty on par with what we did last week, which is good for this phase of the season,” head coach Jessica Devine said. “We competed well and had a couple of really solid PRs. A major highlight from the day was Tyler Sassenberg’s school record in the 5000m. His fitness has been on point and he has been racing extremely well so far this season so it was a well earned and well deserved record!”

Kaitlyn Ladwig paced the Cougars in the women’s mile with her third-place finish (5:48.77). Ladwig also cleared a height of 6-9.75 in the pole vault to place 15th.

Brooke Hogan rounded out the top-five in the women’s 60-meter hurdles with a time of 9.91.

In the men’s throws, Trent Merkins took seventh in the shot put with his mark of 44-8, while Alex Boyd finished ninth in the weight throw with his distance of 46-10.

Though she didn’t qualify for the finals of the women’s weight throw, Jessica Bliese improved No. 10 standing in school history by half-an-inch with her distance of 44-8.75.

The Cougars now head to Brookings, South Dakota, for the SDSU Last Chance Meet on Friday, Feb. 15. The meet gets underway at 11 a.m.

WOMEN’S BASKETBALL
MORRIS – The University of Minnesota Morris women’s basketball team used a strong second half to top the North Central University Rams, 74-43. Kendra Raths and Abby Van Kempen both recorded a double-double in the win.

With the win, Minnesota Morris improves to 15-8 overall and 11-3 in UMAC action, while North Central is now 14-8 overall and 8-6 in conference play.

The two teams got off to a slow start in the game as North Central led Minnesota Morris, 10-7, after the first quarter.

Heading into the closing seconds of the first half, Elli Stevenson connected on a jumper with 23 seconds left to make it a 27-22 in favor of North Central. The Rams then brought the ball down the court and Betty Rand hit a 3-pointer at the buzzer to make it 30-22.

The second half saw the Cougars click offensively and defensively. In the third quarter alone, Minnesota Morris scored 30 points – eight more points than the first half combined. Defensively, the Cougars allowed 30 first half points and then allowed 13 points over the final 20 minutes of regulation.

Minnesota Morris capped off the game by outscoring North Central, 22-5, to secure its 15th victory of the season.

MEN’S BASKETBALL
MORRIS – The University of Minnesota Morris men’s basketball team kept its UMAC Tournament hopes alive as it topped the North Central Rams, 76-62. The Cougars found success from 3-point range in second half to hold off the Rams.

“Our best defensive effort of the year,” head coach Paul Grove said. “We held a great offensive team to 62 points.”
With the win, Minnesota Morris is now 9-14 on the year and 6-8 in conference play, while North Central falls to 5-18 overall and 0-14 in UMAC action.

North Central opened up the game on an 8-0 run over the first 3:16 of play. The Cougars then responded with a 20-4 run make it 20-12 in favor of Minnesota Morris with 8:39 left in the first half. The first half came to a close with the Rams holding a 34-29 lead over the Cougars.

Jack Martin gave the Rams a 52-51 lead on a jumper with 8:05 left in regulation. Following Martin’s basket, Pendelton and Noah Grove hit back-to-back 3-pointers to build the Cougar lead to five points (57-52) with 6:51 left to play.

Micah Filer brought the Rams within two points on a 3-pointer with 3:14 to go, but North Central wouldn’t score again down the stretch.