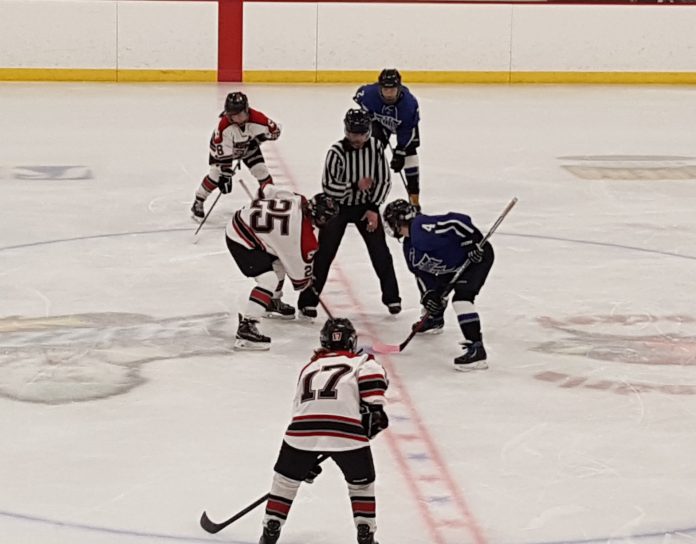 Section 6A Quarterfinals
(2) Alexandria 19, (7) Morris/Benson Area 0
ALEXANDRIA – Leah Thompson made 56 saves in net as Morris/Benson Area’s season came to an end with a 19-0 loss to Alexandria in the section 6A quarterfinals.
The Cardinals out-shot the Storm 75-3 and led by Kaci Trosvig who tallied nine points (3g, 6a), Hanley Block scored four goals with two assists, Meg Schercliffe and McKenna Ellingson each had six-point performances.
The Storm’s season ends with a record of 3-20, while the Cardinals are 14-12 and will face Willmar in the section semifinals on Tuesday.

Bagley/Fosston 6, Morris/Benson Area 3
BENSON – Alex Rolfson broke a 2-2 tie at 7:00 of the second period and Bagley/Fosston went on to defeat Morris/Benson Area 6-3 on Saturday.
Griffin Brovold had two goals with two assists and Brycen Olson stopped 26 shots for the Flyers who are 8-12 on the season.
Brady Loge had a goal and an assist for the Storm, Matt Tolifson and Will Breuer added goals with Brady DeHaan and Kolby Goff adding assists. Brady Backman made 25 saves in net as the Storm fall to 8-13.

Morris Area/Chokio-Alberta 79, Hancock 77
MORRIS – Hancock’s Connor Reese threw up a half-court heave at the buzzer that bounced off the front iron and Morris Area/Chokio-Alberta escaped the Cougar Sports Center with a thrilling 79-77 defeat of the Owls on Saturday.
The Tigers built up a 13-point lead with eight minutes left when the Owls began to chip away and the game ended with a flurry of clutch shots and highlight reel plays by both squads.
The Tigers shot 55 percent from the field, including 13-25 from three-point range, led by Camden Arndt who scored 19 of their first 24 points and finished with a game-high 29.
Jaret Johnson added 18 points and Thomas Tiernan came off the bench to hit four threes and finish with 14 points as the Tigers improved to 11-8.
The Owls hit 51 percent of their shots and got 24 points with five steals from Bennett Nienhaus, while Cole Reese added 23 points and seven assists.
Connor Reese scored 14 with seven assists and Peyton Rohloff chipped in eight points and 10 rebounds as Hancock falls to 13-4.

Minnewaska 70, Breckenridge 62
FARGO – Jack Blevins and Grant Jensen combined for 46 points and Minnewaska shot 52 percent in a 70-62 win over Breckenridge from the Fargo Civic Center on Saturday.
Aaron VerSteeg had six points with 12 rebounds and Shawn Carsten added nine points for the Lakers who are 14-7, the Cowboys are now 10-8.

Ortonville 66, Hancock 44
ORTONVILLE – Jaidon Conroy scored 22 points to lead Ortonville past Hancock 66-44.
Carlee Hanson had 14 points for the Owls who were just 2-9 from long range, Rylee Hanson added nine points with six rebounds as they fall to 7-10 overall, 2-6 in the Pheasant Conference.
Allyssa Kirchberg added 13 points for the Trojans who are 8-9, 4-5 in conference.

West Central Conference Meet
MELROSE – Olivia Lebrija earned All-Conference honors and Morris Area/Chokio-Alberta took third with their performance at the West Central Conference Meet in Melrose.
The Tigers posted a score of 121.35 and got a handful of personal best performances.
Olivia Lebrija tied for fifth at vault, tied for ninth on beam, eighth on floor, and in fifth in all-around.
Callie Snell set a new personal best on beam (8.1) and placed sixth, tied for ninth at floor, and sixth in all-around with a personal best (29.7), while setting another personal best on bars (6.7). Tasha Koehl tied for seventh on beam, Taylor Kill was seven in all-around.
Other personal bests went to Greta Schaefer on bars (7.0),
Melrose is the conference champion with a score of 142.5 while Benson took runner-up with a 133.35.