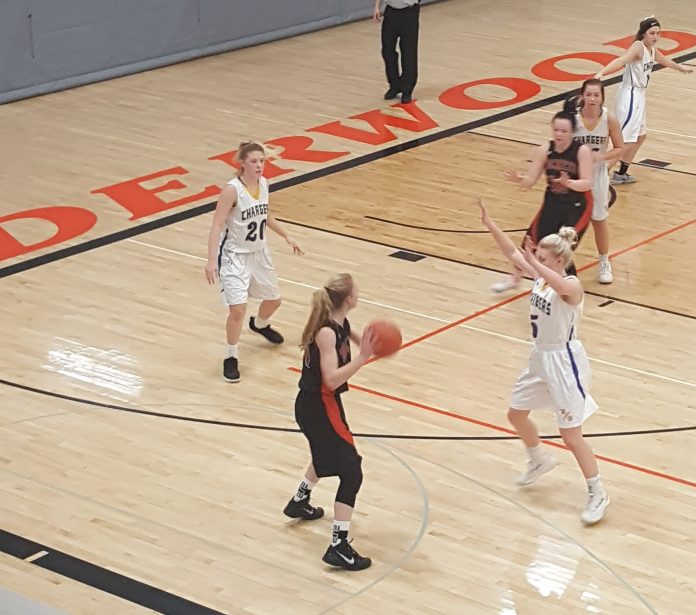 Hancock 51, Battle Lake 35
BATTLE LAKE – Hancock turned in their best defensive effort of the year for a 51-35 victory over Battle Lake on Monday.
The Owls held the Battlers to just 18 percent shooting, including 4-23 from three-point range with a 46-43 rebounding advantage.
Three Owls scored in double-figures led by Lexi Staples with 15 points and eight rebounds. Haley Mattson and Carlee Hanson each added 13 points and Tori Pahl pulled down nine rebounds for the Owls who are 8-10. Battle Lake fell to 4-17.

Underwood 51, Brandon-Evansville 32
UNDERWOOD – Underwood used a 24-2 second half run to earn a season sweep of Brandon-Evansville with a 51-32 victory.
The Chargers had just used a 9-0 run to take a 24-21 lead early in the second half, when all of a sudden they went ice cold, going 11 minutes without a field goal while the Rockets took the lead and pulled away.
Ceri Meech led the Rockets with 15 points and seven rebounds, Morgan Evavold posted a double-double with 10 points, 10 rebounds and Underwood is 17-2, 8-2 in the Little Eight Conference.
Kristin Kokett led the Chargers with seven points, Brittany Korkowski added five with four rebounds as they fall to 14-7, 7-3 in conference.

BOLD 63, Minnewaska 54
GLENWOOD – Four Warriors scored in double-figures and BOLD earned a 63-54 victory over Minnewaska on Monday.
Brenna Weis led with 17, Makenna Steffel had 15, Ashley Trongard added 12, while Mikayla Snow chipped in 11 for the Warriors who are 16-4, 10-2 in the West Central Conference.
Maddie Thorfinnson led the Lakers with 22 points, Emma Thorfinnson had 21 and Hannah Hoffmann chipped in six as they fall to 13-9, 7-4 in conference.