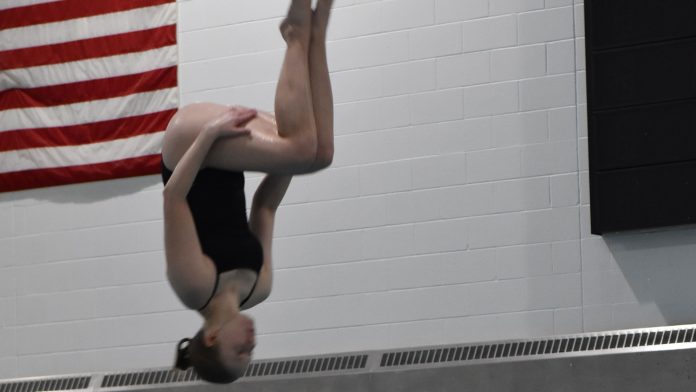 SWIMMING & DIVING
CEDAR RAPIDS, Iowa – The University of Minnesota Morris swimming & diving program opened up the 2019 Liberal Arts Championships with a runner-up finish and a third-place finish on day one.
Taryn Longshore, a sophomore, recorded a score of 351.65 to tally a runner-up finish in the 1-meter dive. Along with Longshore in the 1-meter dive, senior McKenna Vininski finished fourth with a score of 312.60.

In the women’s 800-yard freestyle relay, the quartet of Caitlin Papke, Carolyn Curtis, Liz Melssen and Montana Lawrence combined for a time of 8:22.78 to finish third.

Day two of the 2019 Liberal Arts Championships gets underway on Thursday, Feb. 14, starting at 10 a.m.

With the loss, Minnesota Morris falls to 9-15 overall and 6-9 in conference action, while Northwestern improves to 18-6 overall and 14-1 in UMAC play.

In the first half, the Eagles had an 11-point lead twice with under nine minutes to play, but the Cougars were able to keep the contest close down the stretch.

With 1:20 left in the first half, Kenneth Riley made a 3-pointer to bring the Cougars within three points at 39-36. Following Riley’s 3-pointer, neither team scored sending the game into halftime at 39-36 in favor of Northwestern.

The second half saw Northwestern shoot better than 50-percent from the field (20-of-39) to lead by as much as 24 points.

Northwestern’s Anderson Bazile Jr. connected on a 3-pointer to make it a 74-54 contest in favor of the Eagles with 6:00 left to play.

Minnesota Morris hosts Northland in its regular season finale on Saturday, Feb. 16, at 4:45 p.m. inside the Cougar Sports Center. Saturday’s contest will be Senior Day for the Cougars. The winner of the Minnesota Morris-Northland game will be the No. 5 seed in the 2019 UMAC Tournament.

WOMEN’S BASKETBALL
ST. PAUL – The University of Minnesota Morris women’s basketball team had a pair of chances to tie the game in the closing seconds, but ultimately fell to the Northwestern Eagles, 62-57, Wednesday at the Ericksen Center.

For the Cougar offense, Kendra Raths led the way with 16 points, while Lexus Eagle Chasing scored 15 points and Abby Van Kempen chipped in 13 points. Along with her 16 points, Raths recorded nine rebounds.

After the Cougars built an 11-3 lead over the first 4:06 of play, the Eagles responded with a 13-2 run to make it a 16-13 contest with 1:36 left in the opening quarter. With 15 seconds to go in the first quarter, Eagle Chasing connected on a 3-pointer to tie the game at 16 points apiece.

The Eagles then outscored the Cougars by a margin of 9-6 to take a 25-22 lead into halftime.

The third quarter saw both offenses open up as the two teams combined for 45 points. The Cougars found success in the third quarter on second chance points with 12. With the first 30 minutes in the books, the score was tied at 46 points.

Minnesota Morris brought the game within two points twice down the stretch, but the Cougars weren’t able to even things up.

Minnesota Morris returns home to the Cougar Sports Center for Senior Day on Saturday, Feb. 16. The Cougars will host Northland in the 2018-19 regular season finale for both teams.