Minnesota’s Dupree McBrayer had picked up a loose ball under the basket moments earlier, but he stepped out of bounds, giving Nebraska possession with 2.7 seconds left. Glynn Watson Jr. inbounded to Palmer, who was fouled by Amir Coffey as he went up to shoot.

Palmer went to the line and hit the first free throw, and after a timeout he swished the second to send the Pinnacle Bank Arena crowd into a frenzy.

Gophers coach Richard Pitino started to follow an official off the court, but the official waved him off and Pitino turned around.

The Gophers led 61-60 and had the ball in the final minute, but Murphy, who scored eight of his team’s last 10 points, was called for a charge into Roby with 20.9 seconds left.

Thomas Allen had his shot blocked by Oturu with time running down, and McBrayer grabbed the ball but turned it over when his foot touched the baseline.

That set up the winning sequence for Nebraska, which hadn’t won since Jan. 14.

Minnesota: The Gophers’ longest losing streak of the season continues, and they’ve lost six in a row in Lincoln. They also lost for the seventh time in eight road games.

Nebraska: Palmer’s free throws won the game, but the resurgence of Watson is what helped put the Huskers in position to win. In the previous four games, Watson was 6 of 37 from the floor and 1 of 18 on 3-pointers with a total of 15 points. 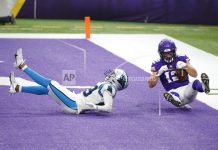 And Totally Redeems Himself! Beebe Goes From Goat To Hero In Vikings Win 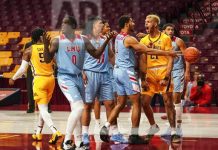 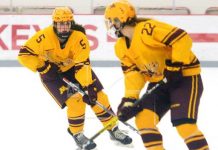 And Totally Redeems Himself! Beebe Goes From Goat To Hero In...